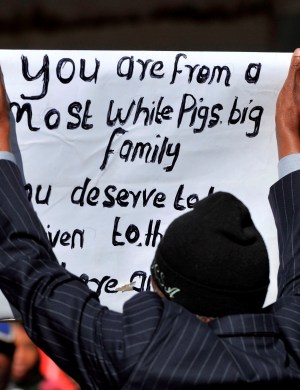 President Jacob Zuma’s lawyers are set to argue in court today that Brett Murray’s portrait of him has infringed his right to dignity, from an African cultural perspective.

Zuma, his children and the ANC will square up in the South Gauteng High Court in Johannesburg against the Goodman Gallery, City Press, and artist Brett Murray over the controversial portrait, The Spear, in which the president is depicted with his genitals exposed.

The case is set to be heard by a full bench and the ANC has called upon its members to come to court to show their solidarity.

Zuma wants the image of The Spear to be declared unlawful and unconstitutional and wants Murray, the Goodman Gallery, and City Press interdicted from displaying, exhibiting, publishing or distributing it.

He also wants the court to order the respondents to pay the costs of his application.

In his heads of argument filed yesterday, Zuma says a balance needs to be achieved between the right to dignity and the right to artistic creativity.

His lawyers will also argue that the portrait, from the cultural perspective of many South Africans, “represents an injurious assault upon and an impairment of (Zuma’s) human dignity”.

“The fact that the majority of these with such cultural sensibilities are African and regarded as species of an inferior culture and status is irrelevant in the objective analysis of whether or not an unlawful infringement occurred,” the court papers say.

Zuma’s papers speak of the “obvious collision of two world views, one regarding itself as superior and the other perpetually demanded to justify its legitimacy and the right to exist,” the papers say.

“We will argue that this state of affairs is driven by a class and racist superiority complex and the viewing of certain cultural sensibilities as inherently inferior and illegitimate.”

An open and democratic society, Zuma’s lawyers argue, “is also the one that seeks to recognise African cultural perspectives as (as) legitimate as the Western lenses which have inspired the suggestions that this case be dismissed”.

Zuma’s legal team will also argue that “antipathy towards an individual should never drive the analysis of whether or not such individuals are worthy of constitutional protection”.

The legal team took a swipe at City Press’s references in its answering affidavits to Zuma’s public admissions to having had sex with at least two women who are not his wives.

“The answering affidavit is replete with silly references to the utterances of (Zuma) in his other cases as if to suggest that such utterances of lifestyle are a legitimate and lawful way of limiting one’s right to human dignity,” the court papers say.

“These references are simply motivated by a misplaced belief that they will create or perpetuate in the court’s mind the sufficient antipathy towards (Zuma), for (City Press) to win the sympathy of the court against (Zuma).”

Zuma says that he doesn’t at all seek to curtail the right to free artistic expression.

But “it is the dissemination, display and further publication of the portrait that [Zuma] seeks to prevent”.