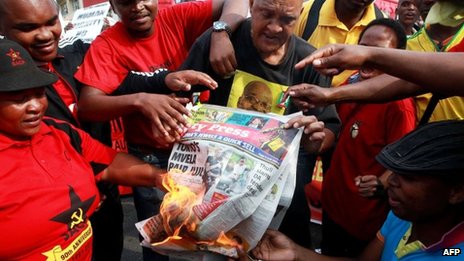 SHEMBE Church spokesman Enoch Mthembu has been ordered to publicly retract a statement which called for artist Brett Murray to be stoned to death.

The Johannesburg High Court yesterday granted the interdict brought by Murray after a request from his lawyers to Mthembu to stop inciting violence against the artist fell on deaf ears.

Mthembu has five days to publicly retract the statement and to file an affidavit to the Registrar confirming that he had complied with the court order. The court also ordered Mthembu to pay the costs of the application.

Murray’s attorney Okyerebea Ampofo-Anti yesterday said the interdict restrained Mthembu or anyone else acting in his name and/or under his instruction from stating that Murray should be stoned to death or physically harmed in any way.

“The order starts from today (Wednesday). And if Mthembu does not apologise he would be in contempt of court and might face arrest. The judge granted the order against Mthembu, not the church,” she said.

Ampofo-Anti said Mthembu has been informed of the court order. However, Mthembu remained defiant yesterday, calling Murray a “drama queen” who wanted to create controversy with his painting. He said he had no intention of apologising to Murray and that he had the money to fight Murray in court.

“Where in the world can you find a person disrespecting the president in that way. He (Murray) should be the first one to apologise. I will never do that.

“He is too arrogant. He should have seen that he did wrong by the huge outcry, with some people even defacing the painting. As he failed to do so (apologise), I’m also not going to nurse his ego because he did this with the purpose to market himself.

“Murray knew very well that creating a controversy would make him more famous and make more money as people would want to buy that painting.”

On Monday, Mthembu called for Murray to be stoned to death over the controversial painting which depicted President Jacob Zuma with his genitals exposed.

Meanwhile, Nkululeko Mthethwa, who said he was the church’s official spokesman, stated that the church would follow its internal process to discipline Mthembu because his utterances went against Shembe teachings of tolerance, respect and self-discipline.

He said Mthembu did not represent the views of the church.

“Mthembu is the former church spokesman. As much as we are not impressed with the painting, the matter was not yet discussed in the church …” Mthethwa said.