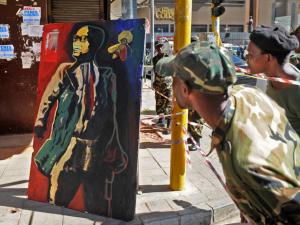 A PAINTING, a political party, and a burst of emotion. There was no warning of Gcina Malindi SC’s breakdown in court yesterday.

Throughout the morning, the judges had consistently been hammering at one point: How were they expected to implement a ban on a picture that had already gone viral not only in SA, but around the world?

Judge Neels Claassen referred to the words of the British judge Lord Hugh Griffiths in 1988, when the UK government tried to prohibit the publication of the memoirs of a former MI5 officer – though the book was freely available in the rest of the world.

“If such was the law then the law would indeed be an ass, for it would seek to deny our own citizens the right to be informed of matters which are freely available throughout the rest of the world,” said Judge Claassen, quoting Griffiths. “If the whole world can see it (The Spear), why not in this country?”

It was about the principle, argued Malindi, about vindication.

He spoke slowly and clearly, in his measured, eloquent way.

He explained that the constitution had not yet been fully realised, but the fall of apartheid had acted as vindication for those people who had struggled against it. “A lot of things promised in the constitution have not reached many people. The right to water, access to water, sanitation, food and shelter,” he said.

“That does not mean the constitution or the law is an ass. They’ve been vindicated that their Struggle was a just Struggle.”

There was no particular signal in his voice, no break that signalled to the gallery behind him that he was upset. Just a moment of silence. “I don’t think you’ve answered the question, but we’ll leave it at that,” said Judge Claassen.

Then, Malindi’s sobs began ringing through the court. The judges adjourned and left the room.

Lawyers clustered around Malindi, offering him comfort, fetching him water. His junior, Muzi Sikhakhane, sat with his head in his hands.

Where had the breakdown come from?

Colleagues claimed his talk of the transition to democracy brought back memories of his own time in the Struggle. Malindi was a political activist in his youth, and one of the co-accused in the 37-month-long Delmas trial.

But in court yesterday, Malindi conceded that the legal battle against The Spear was not a racial issue, but one of elitism.

Nobody deserved such an indignity as Zuma had suffered, he replied when Judge Claassen asked if he would be making the same submissions were it former president FW de Klerk’s head on the portrait rather than Zuma’s.

“Then why make it a racial argument?” asked Judge Claassen. “What evidence is there to say this is a colonial attack on the black culture of this country?”

He said the respondents to the case – artist Brett Murray, the Goodman Gallery, and City Press – had provided evidence from three black artists, saying the painting was not necessarily insulting.

“That’s black against black. Where does the racism come from?” asked Judge Claassen.

Malindi replied: “Race in the eyes of three black experts is irrelevant because they’re connoisseurs of art. They see art through the eyes of the elite class of South Africa that has a greater appreciation of art… Mr Murray should have asked himself, ‘Should I have regard for the many South Africans who have no appreciation for contemporary art, or for some religious sector that might take offence at this?’

“This is not a racial issue, but I implore the court to consider the diversity of South Africa.”

The judge said: “I can understand that argument. Even the elitist group must take into consideration the sensibilities of the rest of the country.”

He said the case should be a question of the dignity of one person versus the artistic expression of the other, regardless of their colour.

Soon after, Malindi broke down.

The legal teams too disappeared into the judges’ chambers.

It was more than two hours before they returned.

The matter was quickly postponed to a yet-to-be-determined date and an interdict was placed on broadcasting footage of Malindi’s breakdown.

Journalists swarmed around him.

“I’m an attorney; it’s unfortunate that I broke down,” he told them.

Information of his past was in the open, he said, but declined to comment further on what had caused his emotional reaction.

Simultaneously, the ANC made an indefinite call for people to boycott the City Press.

Spokesman Jackson Mthembu said: “The boycott will stand until the removal of the insulting portrait of (Zuma) from their website.”

Announcing that there would be a march to the Goodman Gallery on Tuesday, he said: “The City Press has… become a paragon of immorality, abuse and perpetrator of injustice and slander.”

Mthembu added: “Their refusal to remove this portrait from their website and their controlled social media is a clear indication that this newspaper does not belong to our shared democratic dispensation and values.

“This newspaper has singled itself as anti-ANC, the president, our democracy and the majority of South Africans.”

Mthembu said the protest against the Goodman gallery was to indicate that “nobody, including Brett Murray and the gallery, has a right to ‘deface’ the ANC’s logo and insignia.

He said: “The logo of the ANC with an inscription ‘FOR SALE’ and ‘SOLD’ has not only defaced a symbol that the ANC has intellectual property right to, but is a clear sign of attack on the ANC as an organisation.”