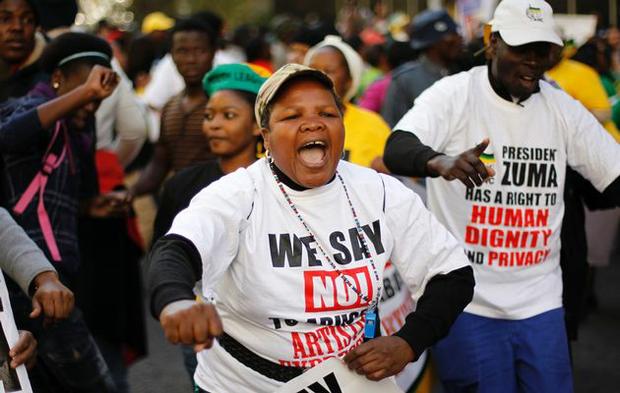 Supporters of the ruling African National Congress demonstrate against the showing of a painting by artist Brett Murray, outside a court in Johannesburg May 24 2012.
Image by: SIPHIWE SIBEKO / Reuters

The ANC on Friday denied it was abusing its power or intimidating anyone in its call to boycott City Press over a picture depicting President Jacob Zuma with genitals exposed.

“We will do everything within the bounds of law to persuade the newspaper to accept the reality that we will not rest until this public display of arrogance is removed and a public apology made,” spokesman Jackson Mthembu said.

His statement was in response to the SA National Editors’ Forum saying the boycott was “tantamount to intimidation and abuse of power”.

“This kind of behaviour is unbecoming of a party that functions on an open, democratic stage, and especially one which leads the national government,” Sanef said.

On Thursday ANC secretary general Gwede Mantashe called for the boycott as the party was making a court application to have a painting, “The Spear” by Brett Murray, removed from public display.

It was defaced at the Goodman Gallery on Tuesday but images remain on City Press’s website. The publication has refused to remove it.

Thursday’s court application pitted Zuma’s claim to a right to dignity against the publication and gallery’s right to freedom of expression. The case was postponed.

Mthembu said until the ANC’s demand was meet, the party would call on all South Africans, including business, labour, churches, youth formations, and women’s organisations to cancel their subscriptions to the newspaper, as it already had.

Information was not immediately available from City Press to confirm the ANC’s cancellation.