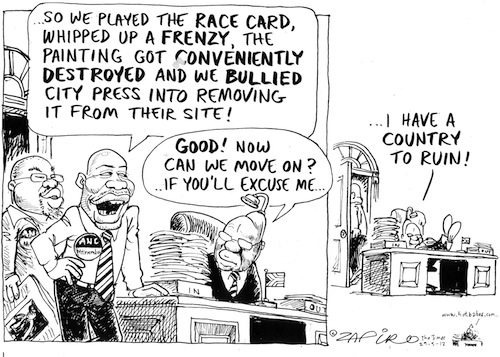 “I am not a racist”: Brett Murray

Controversial artist Brett Murray is a former ANC supporter and is not a racist, he said in an affidavit filed at the High Court in Johannesburg.

JOHANNESBURG - Controversial artist Brett Murray is a former ANC supporter and is not a racist, he said in an affidavit filed at the High Court in Johannesburg.

“I do not produce art with an intention to hurt, humiliate or insult, and that includes the painting that has caused this controversy,” he said in the document.

“I emphatically deny that any such intention motivated the painting or exhibition… I would like to say that I am a proud South African and a former supporter of the ANC. I am not a racist.”

Murray’s painting “The Spear”, which depicts President Jacob Zuma with exposed genitals, generated a national debate when it was shown at the Goodman Gallery in Johannesburg last week.

The artwork formed part of Murray’s exhibition “Hail to the Thief II”.

Zuma said he was hurt, shocked and offended as the painting was a violation of his right to dignity and privacy.

“I respect, as I should, the right to freedom of expression and artistic creativity as constitutionally enshrined rights, but submit that the portrait has overstepped the mark and acceptable levels… of the Constitution,” Zuma said in his affidavit.

He said the continued display of the painting had the effect of impugning his dignity “in the eyes of all who see it”.

“…[I]n particular, the portrait depicts me in a manner that suggests that I am a philanderer, a womaniser and one with no respect.

“It is an undignified depiction of my personality and seeks to create doubt about my personality in the eyes of my fellow citizens, family and children,” said Zuma.

“It is clear in the eyes of those viewing the portrait that it seeks to depict me in a bad, undignified and degrading manner… in terms of the theme of the exhibition, my portrait is meant to convey a message that I am an abuser of power, corrupt and suffer political ineptness.”

Zuma, his children and the ANC filed an urgent application in the High Court in Johannesburg on Thursday to have the painting removed from the gallery and from the website of the City Press newspaper.

“This being a case of violation of my dignity, reputation and integrity, there can be no monetary value attached that I may vindicate to obtain damages for their violations…,” Zuma said in his affidavit.

“I therefore submit that there is no other sufficient remedy that will vindicate my rights other than what is prayed for [the removal of the painting].”

The application was indefinitely postponed.

Murray, who is from Cape Town, said “The Spear” had a dual purpose: it was a work of protest or resistance art, and a satirical piece.

“For me, ‘The Spear’ has a far broader meaning…. It is a metaphor for power, greed and patriarchy,” he said.

“From my perspective as an artist, I felt a sense of betrayal, where heroes of the struggle now appeared to be corrupt, power-hungry and greedy, or where ideals that many had died or made sacrifices for were abandoned on the altar of expedience.”

Murray said over the past few years there had been an ongoing narrative on Zuma — a court had found he was linked to his former financial adviser Schabir Shaik, who was convicted of corruption.

“Another controversial feature of the first applicant’s [Zuma] public life was the failure by the prosecuting authorities to proceed with corruption charges against him, notwithstanding the apparent existence of evidence to sustain such charges.”

Details of Zuma’s sex life had also been “well documented” in the public domain.

“Notwithstanding the fact that he has four wives, he has engaged in extra-marital sex on at least two occasions.”

“For me, satire is critical entertainment. While I might be attacking and ridiculing specific targets, what I am actually doing is articulating my vision of an ideal world in which I want to live.”

That preferred ideal in the South African context was the Freedom Charter, said Murray adding that the debate surrounding his painting was in itself evidence.

He contended that art can provoke debates “however unsettling they might be.”

“There is, therefore, no reason for artists to be censored, however uncomfortable this might be for individuals and for society at large,” said Murray.