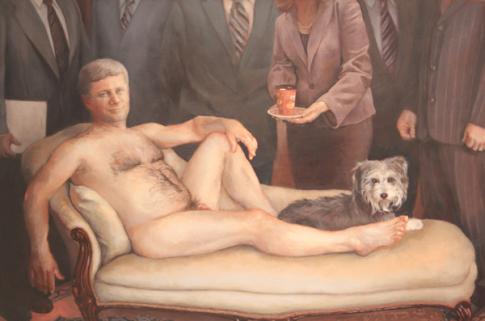 Today: A gallery in Kingston, Ont., exhibits a picture of the Prime Minister wearing a slight smirk, but otherwise buff naked.

The ensuing publicity means artist Margaret Sutherland is quickly $5,000 richer. Canadians understand the work is satirical — it’s loosely based on Manet’s Olympia, with a woman in a business suit proffering a paper cup of Timmy’s best, instead of a black attendant holding flowers. A dog replaces a black cat though Stephen Harper is reportedly a cat person.

There are no angry crowds, no threats to the artist, no mutilation of the canvas. Throughout it all, the PM and his office have no comment.

Not so in South Africa, where a painting of Jacob Zuma has split the nation. Artist Brett Murray depicted the president in a pose based on a Lenin propaganda poster, but with one important difference — his genitals were hanging out.

Zuma’s spokesman says the painting “undermines the esteem of the highest office in the land and impugns the president’s constitutional right to dignity.” Zuma himself argues it should be taken down because it would lead white people to disrespect black leaders. He apparently doesn’t think his behaviour might have something to do with his reputation.

This week, the canvas was vandalized by a black man and a white man apparently acting independently. The gallery has closed indefinitely, but not before selling the painting to a German collector.

The painting is certainly vulgar, but also fair comment. Zuma’s sexual shenanigans have politicized his not so very private parts. The polygamous president generated national debate when he married for a sixth time last month. He has four current wives and 21 children, including several out of wedlock.

At the Johannesburg-based Independent, Donwald Pressly skewers the hypocrisy of Zuma’s African National Congress when he notes its silence over a Facebook posting that mocks a white female politician.

There have been calls for Brett Murray to be stoned to death, albeit by a cleric, for his satirical Spear of the Nation painting … Whatever the artistic merits of the satirical piece of artwork are, the call to violence can never be justified unless it is defence against actual and imminent physical attack …
[T]he president claims that his right to dignity has been impugned. Interestingly there isn’t an avalanche of criticism — particularly from the ANC — of the online version of Western Cape Premier Helen Zille naked. She apparently welcomed the send-up …
The truth is that politicians deserve to be stripped of their masks. Any politician who claims right to privacy is treading on thin ice. Politics is not something for sissies and anyone who finds himself, or herself, on the benches of our city councils, provincial legislatures and Parliament should take the proverbial — and sometimes deeply unfair —punches that are the nature of the business.
In a comment piece for The Guardian, Justice Malala believes the South African president is suffering from delusions of grandeur.

If the image of his two predecessors, Nelson Mandela and Thabo Mbeki, was of nation-builders and cool intellects, Zuma’s is of a man whose concentration is on sex and political self-preservation. He has done more to provide fodder for racist stereotypes than any black South African has done.
Thankfully, enough of us know that the stereotype is false. So what is Zuma’s argument? There is nothing in our constitution that enjoins us to respect the head of state, or to genuflect before him. This is a constitutional democracy, not a monarchy. Respect is earned, and very few would say that the president has earned our respect given his lifestyle. Meanwhile, last week schoolchildren had to go to court to force him to provide books still outstanding six months into the school year.
Betty Caplan at The Star in Nairobi also believes Zuma’s reputation makes him fair game. She points to cartoons by Zapiro, depicting Zuma with a shower coming out of his head.

The point about good cartoonists like this depends on the audience understanding the meaning of irony and also having a shared knowledge of recent events. What that example did was to remind us of the embarrassing trial in which Zuma was accused of having non-consensual sex with the HIV-positive daughter of a family friend and then ridding himself of any danger of catching AIDS by taking a shower!
The idiocy of his reasoning flew in the face of all the research on the transmission of HIV/AIDS. His defence that as a Zulu man confronted by a scantily dressed woman he was only doing his duty by satisfying her was equally ludicrous at a time when South Africa leads the world in AIDS infection per capita.
But as the leader of the party which brought South Africa out of the wilderness it was very shocking as has been his behaviour, justified by that grand old African institution, polygamy. His people languish in poverty while he irresponsibly brings 21 children into the world, all to prove his virility.
Which leads us to the latest Zapiro offering, in which the shower-head has moved to replace Zuma’s penis.