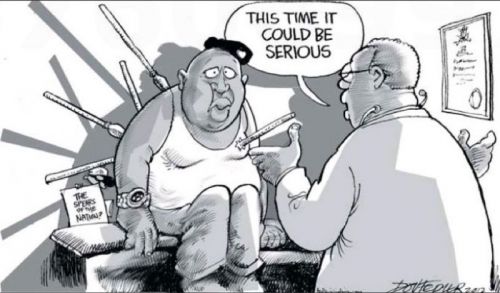 Zuma’s vanity is nothing - it’s HIV that counts

Ladies and gentlemen, this week I bring you the curious case of the President’s penis. If you haven’t seen the organ in question – sensitive readers might wish to turn away now– I should explain that it appears fully exposed in a satirical portrait of South African President Jacob Zuma. The painting shows Zuma in a pose that recalls Lenin in Soviet propaganda, although I’ve never seen a hero of the USSR exposing his genitalia.

It isn’t something I’d want on my wall but I can see what the artist, Brett Murray, is satirising: a self-aggrandising machismo which is deeply unattractive in the leader of a modern democratic country. Anyway, Zuma is furious about the painting, which recently went on show at a Johannesburg gallery. Murray’s images are a mordant commentary on the country’s political elite but Zuma’s party, the ANC, claims the painting is racist. Last week they went to court to have it removed from public view, and demanded that a photograph of it be removed from the website of a South African paper, City Press. The hearing descended into farce when Zuma’s lawyer burst into tears and the case was adjourned.

The painting is called The Spear, which sounds like a phallic joke as well as a reference to Spear of the Nation, the ANC’s old armed wing. By the time the case came to court, it had been defaced in two attacks and removed from the gallery, but the saga has opened another round of hostilities over the state of free expression in South Africa. It’s guaranteed by the constitution but Zuma is notoriously litigious, and he’s gone to court several times over cartoons and articles he didn’t like.

It’s hard to avoid the conclusion that he’s been stung by Murray’s jibe. The ANC claims that the painting presents a stereotypical image of black men, but they can’t deny that the 70-year-old President is a flamboyant polygynist. He’s just married his sixth wife, bringing his current total to four, and he has around 20 children. Polygyny is an oppressive practice, forcing several women to share one man while denying them the right to more than one husband.

But there’s another important issue here. South Africa has a huge problem with HIV-Aids, and Zuma’s predecessor, Thabo Mbeki, had a dismal record on Aids education and prevention. Zuma was cleared of rape in 2006, but his reputation was damaged by his admission that he did not use a condom with his accuser, whom he knew to be HIV-positive. Zuma’s ludicrous claim that he took a shower afterwards encouraged myths about Aids prevention, and led to his being lampooned in a condom advert.

Zuma’s supporters dismiss criticism about his sexual practices as an attack on Zulu culture, which allows polygyny. Awkwardly for them, his province, KwaZulu-Natal, had the highest rate of HIV infection in women attending prenatal checks in 2010; a staggering two-fifths were HIV-positive. Art has done its job, in other words: the leader obsesses over a harmless painting of a penis, while unprotected sex causes a health crisis.