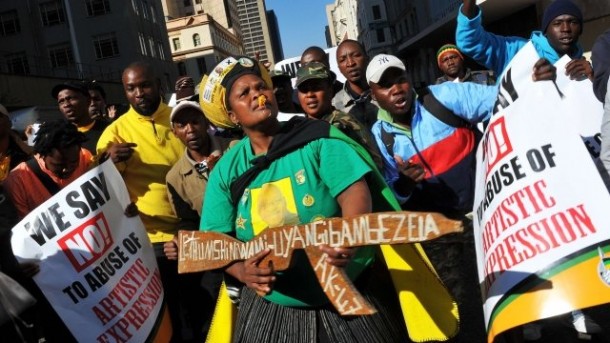 Louis Mabokela, 25, is accused of defacing Brett Murray’s painting “The Spear” at the Goodman Gallery in May.

The trial of two men accused of vandalising a painting depicting President Jacob Zuma with his genitals exposed will continue in the Hillbrow Magistrate’s Court on Thursday.

The matter was postponed in May for further investigation.

Barend la Grange, 58, and Louis Mabokela, 25, are accused of defacing Brett Murray’s painting “The Spear” at the Goodman Gallery in May.

The painting was defaced with red and black paint, obscuring Zuma’s face and waist.

La Grange said after his appearance that the gallery and the artist had the right to display the painting, but once their point had been made, the painting should have been taken down.

“A high court must get involved for a painting? It took me 15 seconds to get rid of the painting,” he said.

Co-accused Mabokela, accompanied by his uncle and a group of ANC supporters outside the court, said he was covering the insult to President Jacob Zuma.

Both men’s bail of R1000 was extended. They face charges of malicious damage to property.

A third person, George Moyo, was arrested for spray-painting on a wall outside the Goodman Gallery. He appeared in the Hillbrow Magistrate’s Court separately on Wednesday and also got R1000 bail.

In May, the Black Business Council promised to assist Mabokela with his legal defence.