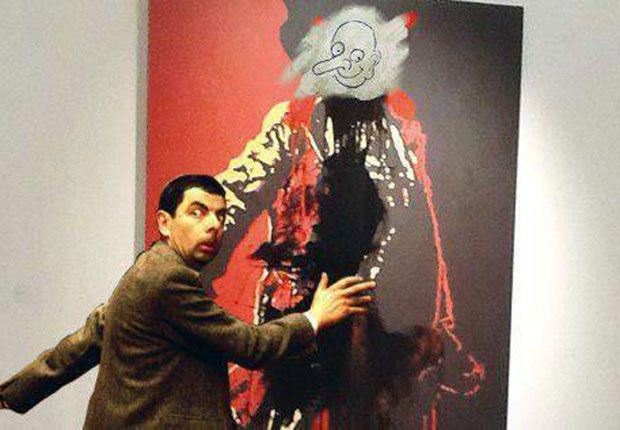 The South African President vs The Painting: A Saga in Many Parts

For centuries, artists have been creating portraits of world leaders memorializing the image of warriors, kings, queens and of course presidents. However, the latest portrait portrayal of South African President Jacob Zuma by provocative artist Brett Murray, has resulted in a countless grave responses. Responses not only to the subject of the artwork, but to the artists attitude, the implied censorship brought on by the lawsuit against his gallery filed by the ruling African National Congress (ANC) on behalf of the president, as well as the action and arrest of the vandals who threw black paint at the work of art.

Aptly titled “The Spear” the portrait is a Soviet propaganda-style painting depicting the president’s likeness in a Lenin-posture with his zipper down exposing his flaccid manhood. The work is part of Brett Murray’s solo exhibition Hail To Thief II that opened at Goodman gallery in Johannesburg with the premise that “ This body of satirical work continues his acerbic attacks on abuses of power, corruption and political dumbness.”

“The Spear” has been seen as more than acerbic proving a political hot button. Aside from having four wives (as is customary amongst many traditional Zulu men), in 2006 the president was accused of raping an HIV positive Aids activist woman who he claimed during court proceedings had invited the action upon herself by the attire she wore. Both his status as a polygamist and this court case have been widely publicized lending to the artworks enormous connotative value. On the flip side, by exposing his flaccid “spear” some feel Murray is attacking Zuma’s virility in an attempt to humiliate the president. In so doing, Murray’s exposure of the man is interpreted not only as a judgment on patriarchy and its assertion of power but a cultural judgment. In addition, the stereotype of “black male as well endowed” is a deeply problematic centerpiece to these associations. With this in mind, the flattering girth of his depicted manhood has not served to cool Zuma’s jets.

Last week the African National Congress filed a suit against Goodman Gallery insisting the painting be removed. Not only this, Zuma insisted the image of the artwork be removed from City Press’ website — the source of its original and widespread distribution. Kudos go to City Press executive editor Fikile-Ntsikelelo Moya who denied the request maintaining the newspapers right to freedom of speech. That is until a day ago when the newspaper wrote an article saying the image had been removed “Out of care and as an olive branch to play a small role in helping turn around a tough moment.” Or perhaps political pressure? Kudos also go to gallery owner and director Liza Essers who has publicly stated that she would refuse to remove the work from her gallery.

Surely censorship — especially when coming from the desk of a political party and especially when involving art — is an age-old tool of repression. Despite the public testament, Esser’s was not reachable for comment. It may be that she has recently given birth, however an anonymous source close to the gallery told Hyperallergic that it is rumored that Esser’s and Murray have both received threats.

Artist, writer and Goldmisth’s College Ph.D student Lisa Stupart published a blog post debating the works testy content and the overt reaction to its exhibition. She explained to Hyperallergic:”For better or worse, this has become a point of argument on which to hinge a lot of (rightful) black anger and (ridiculous) white indignation.”

Although Stupart argues for the rights of the gallery and the artist she is critical of Murray’s response saying: “Murray basically used the “if you think this is racist it’s because you are” argument that is just a corrupt misappropriation of the Duchampian model of the viewer generating meaning of the work, and it just is not ok, especially not in South Africa.”

I understand why Stupart uses the words “especially South Africa,” but perhaps we could find and apply universal standards to discuss these topics in order to avoid creating a false economy in which to isolate these topics ?

Continuing Stupart, like many other critics, argues that the work itself is just not that smart:

I think that aesthetically, ideologically and conceptually it is a decidedly mediocre work and while I am fully in support of work that is incendiary, angry, provocative, even illegal — I think that there needs to be some level of engagement with who is provoked and why, who exactly is burned and whose old injuries are merely reignited.

However, looking at the long history of Murray’s work that has tested the boundaries of race, class and culture and their related stereotypes, it is clear that his intention is satire. In this vein, Khaya Dlanga puts his opinion of the content of the work aside and looks at the actions of the events it sparked in his article for the Mail&Guardian:

Vandalism Attempts to Take Power Back

Then, to add fuel to the already rampant flames Christian activist Barend la Grange entered Goodman Gallery on Tuesday morning and smeared red paint over the portrait. Although he dismisses being a politically motivated person, le Grange is known for not dissimilar antics outlined in his blog that began covering the 2009 elections. Shortly after le Grange assaulted the work, taxi driver Louis Mabokela, caught up in the action, followed on by smearing black paint over Zuma’s face and waistline. However, it is unclear where exactly this can of paint came from. Both men were quickly tackled by security guards — one of whom is now on trial for assault for his rough handling of Mabokela that included a headbutt.

A third man, businessman George Moyo, was arrested outside the gallery with a can of spray paint after he had sprayed the word “respect” on the gallery exterior. These men are supposedly unrelated. However, it seems to good to be true that a local TV station had their camera’s poised and ready to shoot the action. The whole act of vandalism appears to go beyond a simple desire to protect the President privates from being exposed and comes across as an assertion of power, perhaps a symbolic gesture of reclaiming an “upper hand.”

ANC secretary-general Gwede Mantashe explains some of the feelings behind this action in a comment to Reuters last week:

“From where I am sitting, that picture is racist. It is disrespectful. It is crude and it is rude. The more black South Africans forgive and forget, the more they get a kick in the teeth.”

It is clear that this work has uncovered some rightfully angry feelings. However, in a more nuanced and less generalized statement writer Justice Malala looked at the history of Zuma’s behavior and how his sexual lifestyle has come to define him. Malala wrote in his Guardian article: “He has done more to provide fodder for racist stereotypes than any black South African has done.”

Perhaps then, it is a time to look at this case in isolation from the larger topics that have come into play.

I remember photographing Brett Murray’s “’Bart Simpson’/’Africa’” sculpture in the center of Cape Town as part of my first art job. Murray was the winner of a sculpture prize awarded by the Association for Visual Arts where I worked. I had/have deep respect for an artist who pushes the boundaries of social and political etiquette in a manner that provoked in order to question. Perhaps, there is a boundary — a proverbial line in the sand — where innuendo wavers over to jabbing and insult. In this way “The Spear” feels like the joke that was told too soon after the disaster so nobody is ready to laugh.

Either way these situations instigate a vital revision of what constitutes our right to free speech and what can be deemed “unpatriotic” or a “personal attack.” Quite honestly I can’t formulated an opinion and feel inadequate to do so. An artist once said to me, “You will never know what is it like to see your likeness repeatedly looking back at you in stereotypes and insults.” She was right, so even though I understand the intended motivation of such a work, I can’t pretend to understand the possible depth of insult.