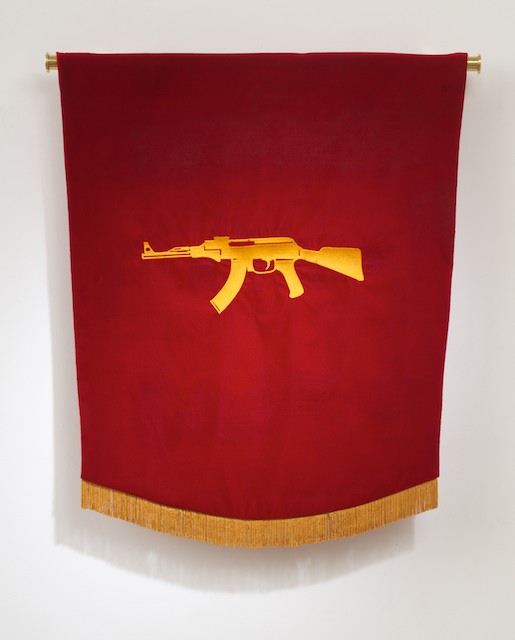 The now-vandalised artwork depicting President Jacob Zuma with exposed genitals has got the ANC’s former armed wing rattling sabres in Durban – and one of the president’s wives leading a protest march.

The MK Military Veterans’ Association in KwaZulu-Natal has condemned the painting, The Spear, which it described as a racist attack on black people.

“People are fighting political battles using artwork. The artist must not play with fire and the president is not somebody’s whipping boy,” the association’s chairman, Themba Mavundla, said at a press briefing on Friday.

“The painting has brought racial tension among people. This is a reminder to those people who take part in these activities that worse can still come. They must tread carefully because we are not willing to go back to war.”

Mavundla said the association’s members did not want to go back to apartheid-era conflict, but warned they still had the “capacity to do so”.

“The painting was racist, disrespectful and distasteful. It is an indication of deeper wounds that have not healed and it shows there has not been reconciliation after apartheid.”

The association’s provincial secretary, Serame Mogale, said: “If Dubul’ iBhunu (the ‘Shoot the Boer’ song that Julius Malema had been banned from singing) has been condemned because it has racial boundaries, how so that the president’s private parts are not said to be racial? We are living in a racially segregated society.”

On Saturday, Zuma’s wife Nompumelelo Ntuli-Zuma led a march of more than 800 people through the Durban CBD to protest against the painting.

The march was organised by the SA Traditional Music Awards and and members of Cosatu joined in.

Last week four men appeared in court regarding the painting, which had been part of Cape Town artist Brett Murray’s exhibition Hail to the Thief II at the Goodman Gallery in Joburg.

Thousands of ANC supporters thereafter marched to the Johannesburg High Court when the ANC took the gallery, Murray and City Press newspaper to court, arguing that the depiction of Zuma had infringed his right to dignity.

City Press editor Ferial Haffajee apologised on Sunday for the hurt caused by the paper’s publishing of the uncensored portrait, but refused to remove the image from its website.

Haffajee addressed Zuma’s daughter Duduzile in her column, saying: “I understand that what is a work of satire to me is a portrait of pain to you.”

Zuma’s children could face teasing as a result of the paper’s actions.

“And if they and your dad saw the work in our pages and it caused harm, then I apologise from the bottom of my heart… Would I publish the image again knowing what I do now? Probably not,” Haffajee admitted

.She had considered placing a “strategic flower” over the part of the image that had caused offence. However, after the ANC called on its followers to boycott the paper, she changed her mind.

The ANC was no longer a party of ideas and debate. Rather, its leaders were pursuing their own ambitions, said Haffajee.

“I’d like to play my role, but if I respond to fear, insult, demands to remove an item of journalism, threats and intimidation, then what role will I be playing to make ours the best possible world for your little brothers and sisters, and all the children for whom we are making a future?” Haffajee said.