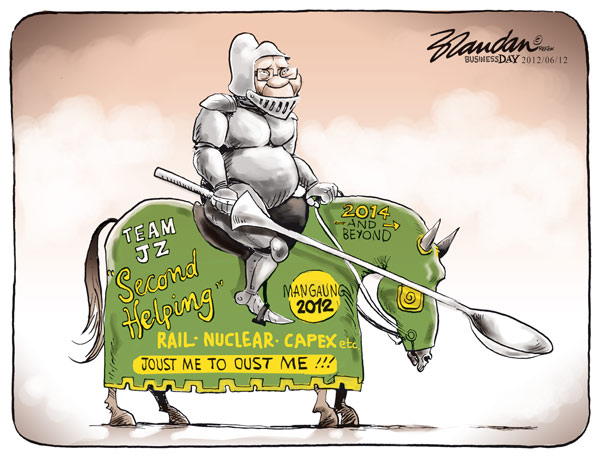 SACP to meet alliance over painting

The SACP will speak to the ANC about a meeting it had with City Press editor Ferial Haffajee, it said on Monday.

“The issues raised at the meeting include a boycott of the City Press and what can be done to take matters positively forward,” spokesman Malesela Maleka said in a statement.

“The SACP welcomes the initiatives of the editor of the City Press so far in apologising and withdrawing the painting from its website and raised further issues with the City Press in this regard.”

In a column on Sunday, Haffajee wrote that she apologised “from the bottom of my heart” if Zuma’s daughter Duduzile Zuma-Sambudla’s little siblings and her father “saw the work in our pages and it caused harm”.

She said she felt Zuma-Sambudla’s pain at Brett Murray’s work, “The Spear”. “I understand that what is a work of satire to me is a portrait of pain to you”.

The SA Communist Party and the African National Congress called for a boycott of City Press last week because Haffajee refused to remove from its website a painting depicting President Jacob Zuma with his genitals exposed.

Haffajee said on Monday that the painting was down “out of care and as an olive branch”.

An SACP delegation led by Nzimande met Haffajee and some of her colleagues on Monday to discuss the newspaper’s coverage of the painting.

The SACP told them it remained committed to freedom of speech and artistic expression.

However, this was not an abstract right that licensed the media and artists to inflame racial tension and trample on people’s dignity.

Maleka said it was agreed that the rights to dignity and freedom of expression were important and should be defended by all South Africans.

“The SACP delegation explained why there was such huge outrage at Murray’s painting and why it had called for a boycott of the City Press,” said Maleka.

“The SACP is clear that in a democracy it has the right to boycott media that tramples on people’s dignity. While understanding people’s anger, the SACP condemns any intimidation of and threats to the staff of City Press.”

Announcing the image’s removal, Haffajee said: “For any editor to respond to a threat to take down an article of journalism without putting up a fight is an unprincipled thing to do, so we’ve fought as much as we could.

“It doesn’t serve City Press or South Africa to dig in our heels and put our fingers in our ears.”

This came after more than a week of debate, arrests, and an urgent application by the ANC, Zuma and his children to have the image banned for violating his and the party’s dignity.

The painting was defaced last week and the genitals are no longer visible.

The ANC welcomed the removal of the image, but said City Press should apologise “to the people of South Africa” and the ANC.

ANC spokesman Jackson Mthembu said the party would carry on with the court case for clarity on the tensions between the rights to dignity, and the right to freedom of expression.

“We appreciate what has been done,” he said. “We appreciate that at least Ferial is saying she can now understand the pain. All that we are saying to her, is can she apologise for the pain,” he said.

The SACP said it supported the media’s right to criticise politicians, provided this did not undermine politicians’ right to dignity.

Maleka said the newspaper had welcomed the meeting and had said that reporting on the painting was not necessarily an endorsement.

“City Press explained that the media by its very nature regularly published material that did not necessarily express the views of its editors or staff,” said Maleka.

They agreed that the experience should create a better understanding between the media, its consumers and political organisations in the interests of consolidating media freedom and our democracy.

The Democratic Alliance said City Press’s self-censorship was unfortunate and would “stop our democracy in its tracks”.

DA national spokesman Mmusi Maimane said whatever anyone might think of the painting, no one had the right to tell any newspaper what to publish, or any artist what to paint.

“It is unfortunate that President Zuma and the ANC chose to intimidate the City Press into taking down the painting from its website,” he said.

“It is equally unfortunate that the City Press has caved in to this pressure after a valiant attempt to fight for what is right.”

Maimane said it should not be forgotten how the apartheid government “bullied its critics in the media”. - Sapa