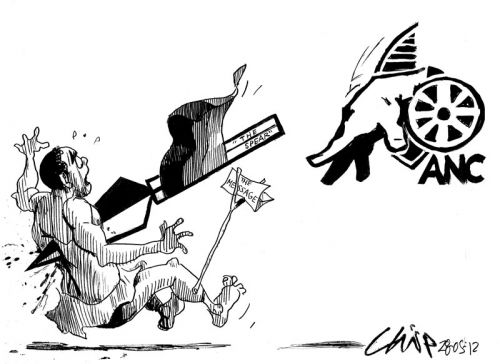 INNERZELA: When do we get a new generation?

Why do we hurt so much? We bruise easily and seem to suffer collective pain whenever one of our own, a black person, is injured. What is it?
There have been massive debates around the depiction of South African President Jacob Zuma in a painting by Brett Murray, a white man. I have several questions to ask as I try and figure out what is really going on here.

Back in 2010, a black man, Ayanda Mabulu, painted Zuma and Bishop Tutu showing their genitals in a work titled Better Poor Than A Rich Puppet. There was no outcry.

Why was there no reaction to this painting that ridiculed not one but several senior figures in the country in more or less the same manner? When the white artist did the same, black intellectuals and white liberals reached for their Frantz Fanon quotes.

On the day, the African National Congress was taking the matter to court, the drama stubbornly remained a few kilometres away at the Goodman Gallery where two strangers, one white and the other black walked in and nonchalantly proceeded to deface the painting.

There was outrage in South Africa when the guard, who took his time to react to the vandalism, head-butted and body-slammed the black man without touching the white one.

Why did the black security guard not arrest the white man? Was it because this one was older (cultural respect), white (delayed effects of slavery) or a baas (lingering effects of apartheid)?

Why did the black security guard violently tackle the black man? Was it because he was young (no cultural respect), black (self hate) or a black person (black on black racism)?

Why did the coloured reporter ask why they were only arresting the black man (sense of justice)?

Why did she point to the white vandal as the real culprit when the black was a culprit as well (racism)? Why did she not ask for both of them to be apprehended?

Lets turn to the aspect of respect. I remember many years ago, a young reporter persisting with questioning a politician in Masvingo and being told off for daring to question an older person. From the politicians point of view, the young man was being rude.

The young man was simply doing his job in trying to obtain answers. If they were white, would that line of questioning have been deemed racist by the politician concerned? When a young white person is rude does it make them racist as well? What is this respect?

What does it entail? Is King Mswati III entitled to respect but not Marie Antoinette because in our culture we cannot throw a torn and battered shoe at the king to show him we are starving?

Now lets be clear, racism is alive and well the world over. So is discrimination on religious, tribal and sexual orientation grounds.

I do not know much, but I know this: Black people have been commenting on their lives for ages through theatre, music, poetry and paintings. This is why we have the blues, jazz, reggae, Dambudzo Marechera, Comrade Fatso and Owen Maseko.

When our people, through their craft, raise their voices in protest or comment at something they feel strongly about, they are termed counter-revolutionary. If the same people are white, they are called racist. When do we move on?

Who is shaping our narrative? Why do we spend our time whingeing about how the world has been unfair to us since the beginning of time instead of charting our course confidently in to the future? Do we enjoy the role of victimhood forever cast in a Tyler Perry movie?

Who decides what is African or not? In the same way that we castigate the Camerons of this world for daring to dictate to us what our opinions on gay issues should be, should we not be castigating politicians who confuse satire with an attack on our culture?

The enlightenment in Europe came about because philosophers and thinkers dared to go against the grain on the centre of the universe, the interpretations of the scriptures, the printing press and the burning of witches.

Artists are people with a talent for putting things into an image that lays bare, pun fully intended, the truth of what the artist or the people are thinking.

This is why we celebrate the arts. Artists light a candle, instead of cursing the darkness by shining a light on what they perceive to be hidden from society, amplifying it for reflection, debate, laughter, tribute or as a warning.

It is part of our culture, our black African culture to have praise poets. It is also part of the same culture to be mocked by those who have the natural talent to do so.

Should we then not perhaps take a cue from the Canadian Prime Ministers spokesperson who, in reaction to a very recent satirical portrait featuring his totally naked boss with a dog resting at his feet, responded: We are not impressed. Everyone knows the PM is a cat person.

Albert Gumbo is an African. A black African. Visit albertgumbo.blogspot.com, follow him on @albertgumbo on twitter or just read this column every Monday on his musings from the university of life.
Disqus
Like
Dislike