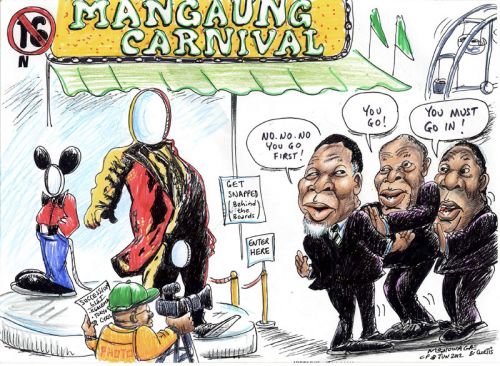 It was an unfortunate choice of evening for Brett Murray’s exhibition to open at the Goodman Gallery. Most art lovers were sipping wine down the other end of Jan Smuts Avenue, at the opening of the R42 million Wits Art Museum.

That meant only a small group had sight of The Spear at Hail to the Thief II, Murray’s show, before it shook up the country. In fact, the exhibition might have opened and closed rather quietly had it not been for White Noise, a conversation piece by City Press journalist Charl Blignaut that Sunday.

In that piece, Murray admitted he’d picked up something of an edge in the response of others to The Spear, saying to Blignaut: “It was telling that the one question everyone asked was, ‘Aren’t you afraid?’ I’d never thought of that. Must I be afraid? Is this part of some collective consciousness that we can’t criticise our leaders?”

Murray couldn’t have described the reaction better. But even for a satirical artist of 25 years standing, the outpouring of fury, race hate and grief at the sight of President Jacob Zuma with a bared penis was a shock.

Murray has been controversial many times before, perhaps most notably back in 1998, when he won a public sculpture competition organised by the Cape Town Urban Arts Foundation. The judges had to choose a work which would be installed at St George’s Mall, and they picked Murray’s bronze Africa – a 3m-high curio with bright yellow Bart Simpson heads jutting out from all sides.

The artist called it “satirical entertainment, about living in South Africa with parallel cultures – the bizarreness of the mix”.

The Spear has also taken on some of those qualities, perhaps in spite of the artist. And, like the Urban Arts Foundation, the Goodman Gallery was bold and brave to host it. But not everyone has cultural or political issues with the work.

Prominent contemporary culture expert David Krut feels The Spear may not have longevity.

“Suddenly, people have heard of this guy (Murray)… people who were not interested in the arts… but I don’t think anybody is thinking it is a great landmark moment in art history in South Africa. It may eventually be laughed off as a joke, when the politics no longer exists.

“Political art doesn’t last anyway. Once the issue is over, it dates, and the whole point about art is that it should be timeless. Murray’s work is normally witty, but there’s no wit to this one. It is simply commentary directed at a political party and as such, I don’t think will last.”

Krut wonders “where does someone like Murray go now with his next body of work?”

Contemporary art specialist Fred Scott of Stephan Welz fine art auctioneers says values in art are “a minefield”, but he takes a different view from Krut, saying that “with all the political issues, I think the painting’s value has increased tremendously because it has become quite unique”.

He puts the emotional response to The Spear partly down to “general tastes in society”.

“The work of Maggie Laubser (the acclaimed 20th century SA artist) has longevity, because she was not appreciated when she was alive, and was crucified by critics who did not understand the innovation in her work. Sometimes an insightful idea becomes more important than the artwork itself, and I think this is the case here.”

Ruarc Peffers, senior paintings specialist at Strauss & Co, disagrees. He believes The Spear has “polarised the art scene, because it depends on the ‘us and them’ situation”.

“And when the market and the media become oversaturated, as they have with this work, then people start getting sick of it. I just don’t think the work or the exhibition warrant all this attention. It’s got blown out of proportion. I doubt Brett Murray has sold out. I’m honestly sceptical.”

Musha Neluheni, education officer at the Johannesburg Art Gallery, believes the blame for the furore over The Spear can be put down to one thing: a lack of art education.

“People don’t really know what art is. Our culture is rugby and boerewors. When people think of art, they think it is beaded. They forget that there’s a whole art history of nude images.”

Neluheni believes Zuma should not be exempt from critique. “I think it shouldn’t matter that it’s the president… It’s not the first image of him naked, there have been many before, but why did none of them cause this hype? Why now? These are questions one needs to ask.”

Murray’s work has also been displayed at the gallery and “he has always commented on politics”.

“I think he kind of represents what people are thinking and feeling about South African politics. He’s done that for 20 years. It’s quite ironic that the ANC posters he mocks in his current exhibition were the same ones he created for the ANC,” says Neluheni.

The idea that art is elitist is outdated, she says. “This also comes back to art education. (The gallery) is free. You don’t have to pay.”

Murray’s profile has now been raised, and Neluheni says “a lot of people outside of the art world all know his name now. But I don’t know if this will significantly raise the value of his work”.