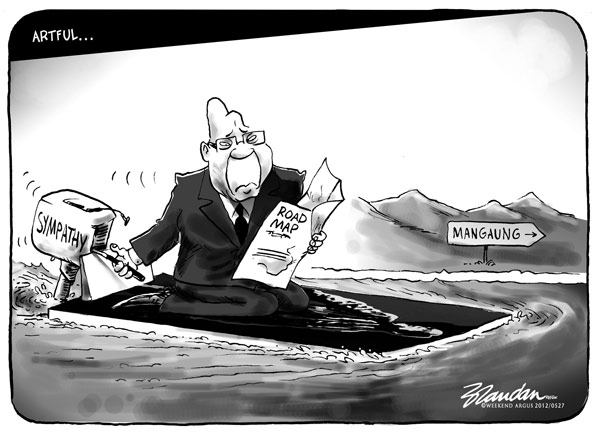 “The Spear is down,” she wrote.

The decision followed more than a week of controversy over Murray’s reworking of a Russian propaganda poster of Marxist revolutionary Vladimir Lenin, for his exhibition “Hail to the Thief II” at the Goodman Gallery in Johannesburg.

“For any editor to respond to a threat to take down an article of journalism without putting up a fight is an unprincipled thing to do, so we’ve fought as much as we could. It doesn’t serve City Press or South Africa to dig in our heels and put our fingers in our ears.”

On Tuesday two people were arrested for defacing the painting, a third for spray painting part of the word “respect” on the gallery’s wall. A senior counsel broke down during a court challenge by the ANC, Zuma and Zuma’s children, to have the painting and web images of it, banned.

Haffajee said she did not want City Press’s plans to be imperilled by being forced into the role of opposition.

“My own identity is that of critical patriot, I am a great fan of my country, and that is how I want to edit. Besides, there are really important stories we lost sight of like the continued investigation into Lieutenant-General Richard Mdluli, unemployment and the infrastructure budget.

“That we are now a symbol of a nation’s anger and rage is never the role of media in society. We are robust and independent, yes, but divisive and deaf, no.”

She said she would be “silly” not to admit that fear played a part in her decision. Vendors were at risk when newspapers were burnt on Saturday and a journalist was evicted from a National Union of Mineworkers conference.

Lessons learnt were that society had started its path to setting how presidents can be treated in art and literature; that mutual understanding was still a work in progress; and that pain was still deep.

“We have not yet defined a Mzansi way of maintaining a leader’s dignity while exercising a robust free speech, or reached an understanding that a leader embodies the nation, no matter what we may think of him or her. Neither does it seem our leaders know that dignity and respect are earned qualities too,” she said.

“We take down the image in the spirit of peacemaking - it is an olive branch. But the debate must not end here and we should all turn this into a learning moment, in the interest of all our freedoms.” - Sapa