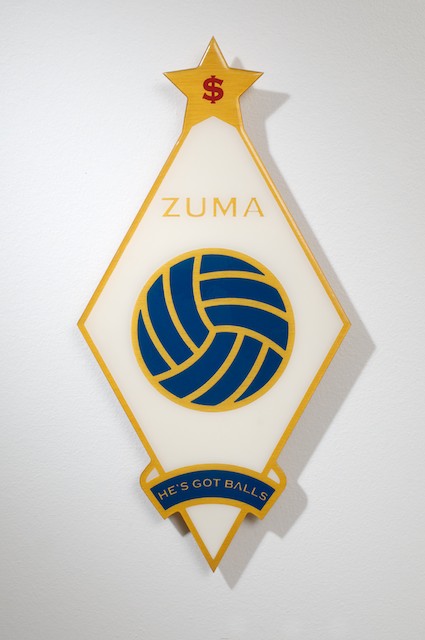 South Africa’s ruling party, the ANC, has called for a boycott of the City Press newspaper after it published a picture depicting President Jacob Zuma in a Leninist pose with exposed genitalia.

The ANC has demanded that the Sunday paper remove the image - a reproduction of a painting by Brett Murray entitled “The spear of the nation” - from its website.

It has called on advertisers not to buy space in the paper and on people not to read it until the publishers comply with its demand.

In calling for the boycott, the ANC described the paper as “a paragon of immorality” which “does not belong to our shared democratic dispensation and values”. It was therefore “anti-ANC, the president, our democracy and the majority of South Africans.”

The paper published a copy of Murray’s painting column 10 days ago (18 May) to accompany a review of the art exhibition in which it was displayed.

But the City Press editor, Ferial Haffajee, responded with a column, “The spear of the nation stays up,” in which she defended her decision to publish on the grounds of both artistic freedom and press freedom. She wrote:

I’ve learnt that the commitment to clauses like free expression (be it in art or journalism) is never going to be tested by still lifes of bowls of flowers or by home decor magazines.

It is always going to be tested by art that pushes boundaries and journalism that upsets holy cows, which is why our clever founders enshrined the right in our constitution.”

Haffajee is an executive board member of the International Press Institute (IPI), which has condemned the boycott.

Its executive director, Alison Bethel McKenzie, described the call for a boycott as “an abuse of power and a form of harassment.” She argued that it is “part of a disturbing trend, which has resulted in an erosion of press freedom in one of Africa’s most respected democracies.”

City Press, which is the third best-selling newspaper in South Africa with a reputed 2.5m readers, was also summoned before the country’s film and publication board as censors sought to decide whether to classify Murray’s work as pornography.

According to the latest news story on the affair, the ANC appears to be divided over the boycott call. Several senior members have opposed the party’s official line.

NB: I am carrying a copy of the picture as an act of solidarity with City Press. The image is also displayed on the WAN-IFRA website and on many other sites.

“Spear of the nation” (Umkhonto we Sizwe) was the title chosen by the ANC’s armed wing during its struggle to overcome apartheid.