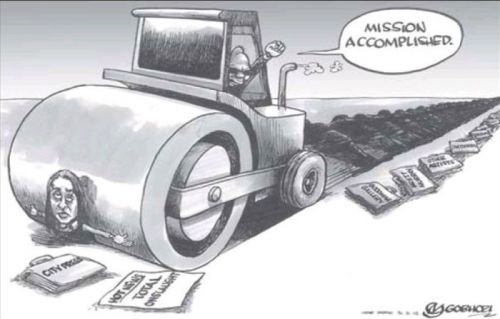 The Spear belongs in ‘museum of shame’

Johannesburg - SA Communist Party leader Blade Nzimande said on Tuesday that the controversial painting The Spear, belongs in “the museum of shame”, and must not be allowed to leave the country.

Nzimande was speaking at the Goodman Gallery where ANC supporters turned up in large numbers to express their disgust of a painting depicting President Jacob Zuma with exposed genitals.

He insisted that the painting not be surrendered to the German who bought it for R136 000.

“It must not leave the country. It must remain here and it must be destroyed here once and for all,” he told the crowd outside the art gallery

Nzimande demanded that the gallery’s management immediately apologise to Zuma and his family. “[The painting] belongs to the museum of shame… We did not fight for freedom to be insulted,” he said.

Several leaders of the ANC and its alliance partners, the Congress of SA Trade Unions (Cosatu) and the SA Communist Party addressed the marchers.

ANC secretary general Gwede Mantashe and other alliance leaders then delivered a memorandum to the gallery’s management, demanding that an image of the painting be taken off its website.

Reports, however, said that this was not the case, and the gallery would not be taking the image down.

The Goodman Gallery later said it would announce the details of the negotiations with the ANC at a briefing in Johannesburg on Wednesday.

Earlier, Mantashe said the party had ended its boycott of City Press after the newspaper removed a picture of the painting from its website.

The newspaper had removed the image on Monday, following an outcry and ANC calls for a boycott.

The Film and Publication Board (FPB), meanwhile, will forward complaints about City Press to the Press Ombudsman “for the sake of the complainants”.

The FPB’s chief operations officer Mmapula Fisha conceded that it did not have the legal jurisdiction to classify any content published or broadcast by media outlets.

“We have always known that we don’t have the authority over newspapers, but we don’t fold our hands. We have to protect [the] children of this country,” said Fisha.

The FPB, is still to decide on the classification of Brett Murray’s contentious painting itself.

Its classifications committee would consider all the input given at a hearing in Centurion, and make a decision by Friday, spokesperson Mlimandlela Ndamase said.

“This committee will make the decision whether to classify or not. It will make a decision as to what classifications and restrictions will be applicable if the members decide to classify,” he said.

Ndamase said the FPB’s interest was the portrait, not the person it depicted.

“The complaints we received relate to The Spear as an artwork. The complaints are not about an individual depicted in the image,” he said.

Advocate Matthew Welz - for the Goodman Gallery - dismissed complaints that the genitals depicted in the portrait would harm children who visited the gallery for inspiration.

He said the children who toured the gallery were often in the company of their parents, and that the gallery’s staff was always at hand to inform and educate the visitors of the greater symbolism behind an art work.

“Kids who visit galleries do so with their parents. You do not want to create a nanny state with kids running around the gallery,” he said.

He said the Goodman Gallery had a proud history of displaying protest art and the Murray portrait fitted this class.

The portrait was not rude nudity, but a strong political statement to those in power, said Welz.

Confronted about the South African history and context, Welz said it was not the mandate of the FPB to determine whether the portrait was appropriate for the country.

“You do not have a moral right to decide that this is what is good for the country. Is the penis excessive? That is the question here,” Welz told FPB members.

He said the board could decide whether there was “undue” display of genitalia on the portrait.

Welz told the FPB there was no chance of the image being repaired after it was vandalised in the gallery.

“In its vandalised form, the image is being taken to Germany where it will be retained by the buyer. It will not be duplicated,” he said.