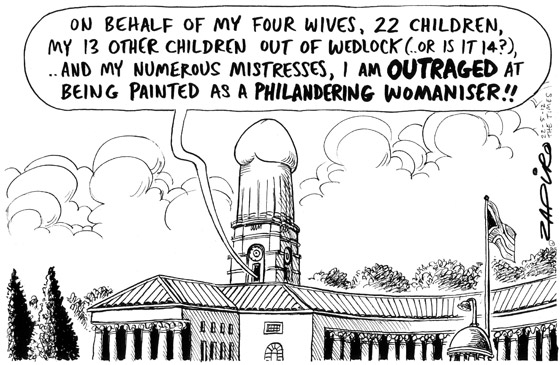 Problematic portrait of a president

ELIZABETH JACKSON: In South Africa this week, a white man’s painting of a black president with his genitals exposed, has caused havoc.

There’ve been death threats against the artist, calls for a boycott of the newspaper which published a photo of the painting, and the temporary closure of the gallery where it was on display.

Our Africa correspondent Ginny Stein reports on a week in South Africa where one painting appears to have divided a nation.

GINNY STEIN: South Africa’s president, Jacob Zuma, put the painting front and centre in the nation’s consciousness when he declared he would take legal action to have his unzipped image removed from public view.

Depicted in a Soviet Lenin-style pose, with his genitals exposed, his announcement to take legal action against his portrait unleashed a storm of controversy, culminating in a large protest march on the Johannesburg gallery where the portrait had been hung.

PROTEST LEADER: We are here in our thousands. Because this is where us demand the right to human dignity for president Zuma.

GINNY STEIN: In a week where art, or one painting, overtook the nation, questions were asked whether the portrait by a white South African artist Brett Murray, one in a series titled “Hail to the Thief Two” was art, or racism, or political parody.

The gallery described this exhibition as a blunt commentary on ruling party corruption.

When Jacob Zuma went to court, he argued almost the very same thing; that in terms of the theme of the exhibition, the portrait sort to convey a message that he was an abuser of power, corrupt and politically inept, and that his dignity was under attack.

Others argued that in conservative South Africa the image of an exposed president was simply too much and that once again white stereotypes of African sexuality were being portrayed.

But opponents of these arguments claim the president, who has four wives, two ex-wives and more than 20 children should not cry foul when society, whether through art, satire or general conversation, discusses his sexuality.

But as the debate raged, lines were drawn.

The president called the portrait racist; the ruling party’s general secretary called for a boycott of the newspaper which published a full frontal photo of the portrait, titled the Spear; and death threats were made.

On the eve of the high court being asked to decide whether the painting should be removed, two men, unknown to each other, one white, the other black, decided to take drastic action of their own: they vandalized the painting

WOMAN: How could you do that?

GINNY STEIN: One painting a red cross over the president’s face and genitals, the other smearing black paint over the portrait.

The painting badly damaged was removed; the gallery temporarily closed but the legal case to remove the painting would still proceed.

In the high court, president Zuma’s lawyer, Gcina Malindi, argued that the painting violated the president’s right under the constitution to dignity, which he believed over-rode the artist’s right to free speech.

But under tough questioning about why the painting should be seen as racist and offensive to black South Africans, and as he was arguing that the opinions of art experts alone should not be taken into account, Mr Malindi broke down in tears.

A former anti-apartheid fighter who was tortured and jailed for his activities, his own past and his attempts to defend his president’s honour brought him undone.

The court immediately adjourned and later ordered the media not to broadcast images of the lawyer weeping.

Severely, if not irreparably damaged, the painting has been removed, but the heat of the argument is still raw.

As a new week dawned, busloads of the president’s supporters were trucked in to march on the gallery.

PROTESTER: We did not fight for freedom to be insulted.

GINNY STEIN: A thousand came to voice their disapproval, not quite the 15,000 organisers had promised.

As one blogger wrote at the start of this week from neighbouring Zimbabwe: “if you live in a country where to insult the president Robert Mugabe is a criminal offence, you cannot but stand in awe when you wake up one morning to images on the internet of Jacob Zuma, the president from across the Limpopo River, depicted in Lenin’s striking heroic pose with his genitals exposed.

Humorous, shocking and offensive, it does precisely what its creator intended to do, it provokes.

Trivial? Distasteful? A crude stereotype of African male sexuality? Culturally chauvinistic? Or just a bad painting. It may be all of those things or none.”

But the one thing that the painting has done is expose the deep divisions, mostly hidden within the Rainbow Nation.

This is Ginny Stein in Johannesburg reporting for Correspondents