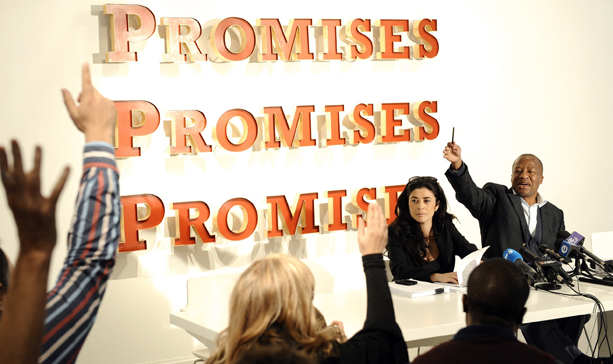 A legal dispute between the African National Congress (ANC) and Johannesburg’s Goodman Gallery over a controversial painting of President Jacob Zuma has been settled out of court, the Financial Times reported today. Created by the artist Brett Murray and displayed in an exhibition titled “Hail to the Thief II,” the painting depicted South Africa’s president in a heroic, Lenin-style stance. Like other works in the show, it appeared to riff on the visual language of Soviet-era propaganda posters, though in this case, it also portrayed the President’s genitals hanging prominently out of the fly of his pants. Rendered in fiery red, yellow, and black acrylic paint and titled “Spear,” the painting was taken as more than a little provocative given the uncommon delicacy of sex and race relations in South African culture.

“Spear” may not be the first work of art to make reference to Zuma’s colorful sexual history. A practicing polygamist, he has reportedly sired several of his 20 children out of wedlock, and was the defendant in a rape trial between 2005 and 2006 involving the daughter of a fellow ANC member who was known to be HIV positive.

The case surrounding the Murray painting is nevertheless unprecedented for the ire it has sparked in the South African public. Shortly after “Hail to the Thief II” opened, representatives from the ANC called for the painting’s removal on the grounds that it violated the dignity of Zuma’s office. At first, the gallery resisted, telling the AFP that taking it down would amount to censorship. In response party members announced plans to take the gallery to court.

“The presidency is shocked and disgusted at the grotesque painting by Brett Murray depicting President Jacob Zuma in an offensive manner,” ANC spokesman Mac Maharaj told the South African Times. “We are amazed at the crude and offensive manner in which this artist denigrates the person and the office of the President of the Republic of South Africa.”

Zuma loyalists were not the only ones who felt Murray had gone too far. Arts and Culture Minister Paul Mashatile called the gallery to express his concern, and a statement from the Congress of South African Trade Unions objected to the work’s display. “This picture is offensive and disrespectful not only to an individual,” they wrote, “but to the democratically elected President of South Africa and therefore to the whole country and the people of South Africa.”

On May 22, while the case was being argued in court, the Telegraph reported that hundreds of ANC supporters were marching through the streets Johannesburg, calling for the the painting’s removal. That same day, the Guardian released a video of two men defacing the work with x-marks of red paint and smeared black paint. According to CNN, about 15,000 people were expected to attend another march the following Tuesday, this time to the doorstep of the gallery.

In court, Zuma’s friend and legal counsel Gcina Malindi spoke sharply, arguing that the painting’s insult to Zuma’s person was also an insult to human rights, and breaking into sobs as he described his alliance with the president during the years of apartheid. By this point, it appeared that the fulcrum of controversy had moved from questions about Murray’s right to openly mock elected officials with his art to broader questions about Zuma’s race. Announcing that they would remove the painting as a “gesture of goodwill” on Wednesday morning, the Goodman Gallery appeared to relent, bringing the polarizing dispute to a close.