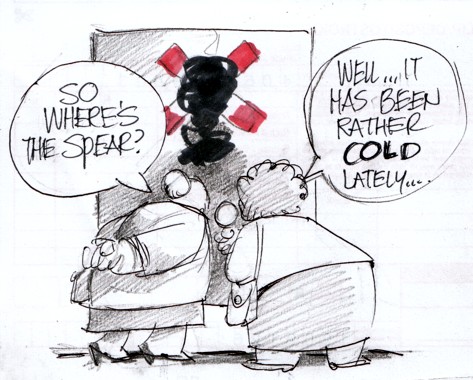 In a scathing attack on President Jacob Zuma’s leadership, DA parliamentary leader Lindiwe Mazibuko called on him on Wednesday to “put self-interest aside” and not to seek re-election for a second term as president.

“This is what the people of South Africa want, and what many people in your own party want. There are deep divisions in South Africa and in the ANC house today, and the president cannot overcome them,” an impassioned Mazibuko said, looking straight at Zuma, during the Presidency budget vote.

Speaking above loud heckling from ANC benches, Mazibuko said SA was suffering a crisis of leadership, the stark evidence of which was “pervasive” and which was causing havoc on the “front line of the economy where real people live”.

This failure of leadership was allowing corruption to thrive.

Accusing Zuma of being “out of touch” and of “leaving the people behind” in a country “crying out” for a leader, Mazibuko said he had failed to provide justification for why he would seek a second term.

Zuma took a hammering from Mazibuko over the Richard Mdluli saga, the arms deal, e-tolling, unemployment, the government’s economic plans, his “splurging” on the National Youth Development Agency, and his use of three jets to fly to the UN in New York.

She cited the collapse of the education and health departments of the Eastern Cape and Limpopo as examples of failed leadership, saying the government was “teetering under the weight of mismanagement and poor decision-making”.

“I ask the president to look deep within his heart to answer a difficult question – the most difficult of all. Such honesty takes raw courage.”

She asked: “For the sake of our country, will you put aside self-interest and not make yourself available for re-election?”

Mazibuko said Zuma’s failure to lead had paralysed him.

“He is forced to bow before unelected Cosatu and others. He is unable to drive policy that runs counter to the interests of the disparate factions that brought him to power.

“The president will never be able to stamp his authority on his government because these factions do not share a common purpose.”

Mazibuko said that by declaring himself unavailable for re-election, Zuma would not have to face the “relentless pressure” of trying to get re-elected in what was set to be a “brutal and protracted” struggle for power.

“If the president did so, he would have an opportunity to put back the undoubted talents of his warm-heartedness, compassion and conflict resolution into the service of our great nation,” Mazibuko said.

She said a “titanic” power struggle and the saga of suspended police commissioner Mdluli were enveloping the security services.

“The president’s attention has been diverted from his duties. Energy spent this week on organising a march to an art gallery and a legal challenge to a work of satire distract from the serious work of government.

“Last year, the president promised us ‘the year of the job’. Yet the only job that we seem to hear about is his: will he keep it? Will he lose it? Who might challenge him?”

Mazibuko said one basic question emerged from the Mdluli saga: “Why would a head of state allow someone facing serious charges to occupy a senior post in the police service and appear in police uniform in the first place?”

She said Zuma’s actions – and what he failed to do – were hardening the perception that his own political needs trumped service delivery and the rule of law.