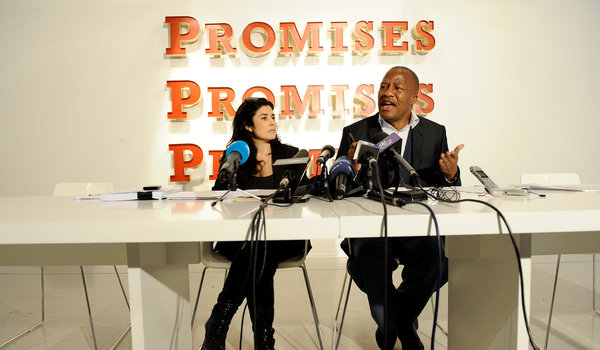 Amid Uproar, Graphic Painting of South African President Is Removed From Gallery

JOHANNESBURG — To the artist and a gallery director, it was a scathing piece of satire — a riff on Soviet-style propaganda aimed at a powerful president with a controversial sexual history who presides over a liberation movement-turned-political party that many here feel has lost its revolutionary appeal.
Related

Connect With Us on Twitter
Follow @nytimesworld for international breaking news and headlines.
Twitter List: Reporters and Editors
But to that party, the African National Congress; many black South Africans; and, most of all, the man it depicted, President Jacob Zuma, the painting — which portrayed Mr. Zuma in a Leninesque pose with his genitals exposed — was a reminder of the pain and humiliation frequently visited on black bodies by white hands under apartheid.

On Wednesday, both sides agreed to disagree on the merits of the painting, “The Spear,” by the Cape Town artist Brett Murray, which was part of an exhibit at the Goodman Gallery here. But they agreed on one thing: It would no longer be on display. In exchange for the A.N.C.’s agreeing to drop a lawsuit, the gallery agreed to remove the work, which had already been vandalized, from the exhibition.

The battle over the painting pit the right to free expression, which has been increasingly under pressure in South Africa, against what the A.N.C. argued was Mr. Zuma’s right to dignity. It demonstrated that even as the years tick by since apartheid’s end, the wounds of that brutal system remain deep.

The portrayal of the president’s genitals in a painting by a white artist outraged many black South Africans who argued that it harked back to apartheid-era humiliations meted out against them. The A.N.C. and its allies called for protest marches and a boycott of a newspaper that had published a photograph of the painting. After two weeks of resistance on free speech grounds, the gallery agreed to remove the painting.

“The debate engendered by this work has been robust and rich and will continue,” said a joint statement released by the Goodman Gallery and the A.N.C.“But what is also clear is the real distress and hurt that this image has caused some people. The image has conjured up past historical hurts and humiliations for some people.”

Both sides claimed victory in a conciliatory but at times tense news conference at the gallery.

“In this process, we have stood very firm with respect to our belief in freedom of artistic expression,” said the gallery’s director, Liza Essers, adding that the exhibition would continue without “The Spear.”

An A.N.C. spokesman, Jackson Mthembu, said freedom of expression must be balanced against human dignity and shared understanding. “All of us have a duty to build a commonly shared geographic space called South Africa,” he said. “We cannot do so if we do not appreciate the humiliation of the past to some degree.”

The agreement was an attempt to end a bitter public battle over the painting. Gallery staff members had received death threats. Vandals wrote “traitor” on the car of a black gallery employee, and two men defaced the painting, obscuring both the face and the genitals.

As often happens in post-apartheid South Africa, the arguments often broke along racial lines. White commentators tended to focus on the artist’s right to expression and the right of newspapers and other publications to show photographs of the painting.

The gallery, which draws a largely white audience, and whose administrative and curatorial staff has only one black member, drew harsh criticism from unexpected quarters. Several black writers, some of whom are often harshly critical of the A.N.C. and Mr. Zuma, said the work tapped apartheid-era fears.

“Regardless of the artist’s intentions, ‘The Spear’ became a proxy for the anger over the many unremedied injuries, large and small, that blacks have suffered at the hands of whites and for the lack of cognizance of these offenses,” wrote Osiame Molefe, a columnist for the news Web site The Daily Maverick.

Nudity in particular is a delicate issue. Under apartheid-era laws, black people who were not carrying a required pass were subject to strip searches by the police, and black miners were often stripped by overseers looking for gold hidden in their body cavities. The idea of a white man painting the penis of a black man, particularly the nation’s leader, struck many people as insensitive.

Under apartheid, the columnist Justice Malala wrote for The Times of Johannesburg, “the black man was viewed as a sex-obsessed, lazy … well, animal, really. We were not human here.”

In an open letter to one of Mr. Zuma’s daughters, Ferial Haffajee, the editor of The City Press, the newspaper that printed the photograph of the painting, said she regretted the decision.

“Our common national dignity is a paper-thin one; a chimera in parts,” she wrote. “The exposure of black genitalia is still a raw and festering wound — its resurrection in any form a painful flashback to the various and many indignities inflicted on the black body from colonialism to its later manifestation as apartheid.”

Ms. Essers said such an interpretation did not occur to her or to Mr. Murray as they planned and designed the exhibition, which broadly satirizes the corruption and misrule that have plagued the A.N.C. in recent years. Mr. Mthembu said that while the party might not like the other images on display, it objected only to “The Spear.”

Mr. Zuma was acquitted in 2006 of charges that he had raped a young woman. He said the sex had been consensual, but was widely criticized for testifying that although he knew the woman was infected with the virus that causes AIDS, he did not use a condom.

He said he showered afterward in an effort to prevent infection, a statement that angered many AIDS activists and health officials here. A practicing polygamist, Mr. Zuma has four wives and more than 20 children.