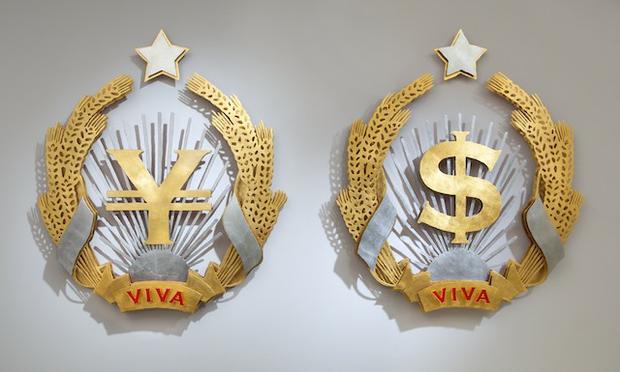 My initial reaction to Brett Murray’s portrait The Spear was a large guffaw and then amazement at the artist’s audacity. I recognised the Leninist pose and what appeared to be a strap-on penis hanging flaccidly. The portrait seems to be from a low angle perspective thereby giving the subject of the portrait an imposing, domineering stature tainted by an air of arrogance. The colours used show anger as well as an affiliation to Communism which seems to be emerging from the shadows. The portrait is indeed that of a black man, and my immediate recognition was that because the ANC is perceived to be a black party, it was representative of this, but not of the black race.

Moreover, the style and clothing of the subject seem to reflect on the minority rather than the majority. It is a reflection of a minority elite who seem to have distanced themselves from the vast majority through their adherence to a code or discipline that is out of sorts with the realities of the present day. The flaccid penis seems to represent a latent physiological greed for dominance evocated by the delusion of deception. The whole portrait represents the concept that the organisation is totally divorced from the real needs of the nation and is intent on fulfilling its own mandate and not that of the people. It was only after further inspection that I realised that the subject of the portrait could be Zuma, or Vavi, or any one of the leaders of the Tripartite Alliance.

What is most striking is that the artist has directed his anger, not so much at the subject, but at the fact that something he must have genuinely believed in and supported, in his mind, has betrayed him. Murray’s opposition to apartheid is well known and he used art as a vehicle to do this, but for him to mount an exhibition whose underlying and over-reaching theme is one of anger is an indication of how betrayed he must feel by the ANC that he fought and sacrificed for during the dying years of apartheid. Yet, is it a race issue? Is it a race issue between one white man and the whole black race? There are many commentators who happen to be black who have indicated much the same as Murray has through the print media, and who hold views that are more radical. Theirs is not the rant of a few disaffected black individuals against the whole black race. Theirs and Murray’s views are constructed by the very environments in which they live. As writers and artists they wear the passions on their sleeves, as it were, and in many cases allow their emotions to override their sense of logic, although they have reached their levels of emotion through the logical application of knowledge garnered from their political and social environments.

Tambo and Mandela’s emotional responses were constructed through the environment in which they lived, and that environment gave them the stature they have achieved. Theirs was not a campaign against the white race in toto. Theirs was a campaign against the injustices of their reality at the time. In effect, Murray has done something similar through his art. He is railing against the injustices that are being perpetuated and sold to the South African people as a whole. The portrait is an indication that the organisation that brought freedom to this land has been sold out to a corrupt and sinister backward-looking ideology that is being arrogantly pursued and propagated against the chartered history of the brutal, totalitarian domination of the nations upon whom this discredited and unworkable ideology was imposed. What is brought into question are the values and morals of the present Tripartite Alliance as opposed to the founding values, principals and morals of the organisation one hundred years ago, and the founding values, principles and morals that marked the emergence of an apartheid-free South Africa in 1994 which are enshrined in our Constitution.

It is significant that the largest howlers of contempt for the portrait are the self-same people who, through Zuma’s imposition as president of the ANC and thereby as president of the nation, have managed to ensure that their ideological perspective has been brought to the fore with absolute disregard to the democratic principles that we as South Africans agreed to when we voted in 1994. Nzimande, Mantashe and Vavi, as representatives of Communist ideology, through their unwavering support for a man, who might be a very nice man and a good, loving father and grandfather, but who has also compromised himself by his own deeds, have manipulated themselves and their organisations into a position where their voice is the only voice, and that any other voice must be discredited by any means possible.

What they fail to realise, because of their ideological blindness, is that there has been a general movement away from the shrill calls for the imposition of a workers’ state by the majority of the population who were quite happy with the moderate, centrist ideology of the ANC itself under Mandela, and to an extent, Mbeki. Their organisations continued the Struggle, not for freedom from apartheid, but for the freedom to impose their own discredited Communist ideology on the population through the hijacking of the ANC from within. They are well aware that should they stand as political parties in a general election their chances of gaining even a foothold in parliament are very slim indeed. The vast majority of South Africans do not support this ideology. Thus, to drum up support, these adherents of Communism will demean and indignify themselves by using race as a method of dividing the nation and pitting South African against South African. Many commentators have argued that this is a clever ploy to distract the people from the real issues of corruption, fraud, graft, non-delivery, incompetence, thuggery and all the other ills that beset the Tripartite Alliance at the moment.

What is also significant, and this bears directly on the emotions contained in the portrait, is the fact that the march on the Goodman Gallery was organised on the same day that more than 500 volunteers gathered at Nelson Mandela Square, a mere stone’s throw from the gathering point of the marchers at Zoo Lake, to sing happy birthday to the Founding Father of the Nation. This cannot be coincidental in the least! In fact, it can be seen as insensitive and disrespectful of Nelson Mandela and the legacy bestowed by him on the nation. It is an indication that the Tripartite Alliance as it is today has veered so far from the ANC of Nelson Mandela that it sees fit to treat the celebration of the life of one of the country’s greatest sons with the greatest disrespect. This comes back to the analysis of the portrait in the first paragraph.

No South African would even contemplate painting a portrait of Nelson Mandela with a strap-on penis. Many may love him, some might hate him, but there is no denying the fact that this is a man who could dine with kings and sup with the poor. That is why this portrait is not about race and it is not a racist portrait. It is about a clash of ideologies.
The portrait depicts the crass and dishonest imposition of an ideology on an unsuspecting nation through the backdoor. At Polokwane, Zuma was elected by a mere 2400 attendees at the conference. That might be democratic in a club or society, but it is not democratic insofar as a nation of 50 million is concerned. Mantashe and Nzimande never stood for election, and were not voted for in a general election. They merely found themselves in their positions through their support for Zuma and their positions as leaders in one of the branches of the Tripartite Alliance. Their advocacy of Zuma over that of Mbeki enabled them to get to the centre of power and to enforce their agenda by using the ANC as a vehicle.

The Mangaung Conference at the end of the year will be most decisive in its outcome, and the Communists know this. If Zuma is replaced, also by a minority vote, their Struggle for a Socialist Workers’ Utopia will have been in vain. Their organisations will die a sudden death, and their revolution will have been deferred forever and that for which they have sacrificed their lives and intelligence will have been a massive waste of time and energy. Colonialism, Imperialism, Communism and Apartheid have all but disappeared into the mists of time, but here on the southern tip of Africa there are those who persist on reviving these ghosts through their speeches, writings and beliefs.

And, this is the reason that there is such a hullaballoo about a mere painting. The painting exposes more than the supposed family jewels of a sitting president. It exposes the corrupt, immoral and godless framework of an organisation that has been revolutionised from within by people who want to ensure that the ideology they have blindly paid obeisance to for the majority of their lives, despite the warnings provided by history, is imposed without due regard for the people, the economy and the legacy of the recent past.

In 1994, a vote for the ANC was a vote for victory against apartheid. A vote for the ANC today, to use a football analogy, is a home goal. Let’s hope and pray that as a united nation that we can all see the writing on the wall and strive to regain our stature in the eyes of the world as a nation that has moved on from a fractured past to one that can build a prosperous future without the spectre of Communist manipulation haunting our backs. The only ideology that can work, and is working, is that of an open opportunity society that has an inbuilt social conscience to uplift the poor out of poverty through the judicious use of state and private sector funding.