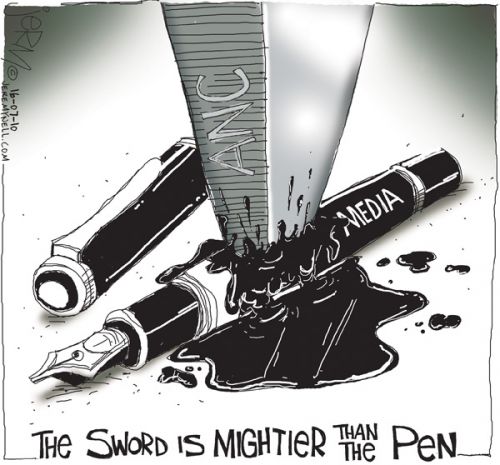 Brett Murray’s defaced “The Spear” stands as a monument to intolerance. After thousands of supporters of the ANC, South Africa’s ruling party, marched to the Goodman Gallery where the painting the had once been on display, the Johannesburg gallery has agreed it will not be displayed publicly again.

While representations of the painting (which depicts the president of South Africa with his genitals exposed) now enjoy the ubiquity of the web, what price have we paid for the original painting’s removal from the gallery’s wall? In the aftermath of the fury unleashed by the ANC, will artists still dare to challenge and provoke? Or has South Africa accepted that culture and “acceptability” is something determined only by its ruling party?

It has become impossible for the ANC to mask its totalitarian instincts: if it hadn’t already, the mask slipped this week. When the party feels threatened, the Constitution no longer matters; neither do the courts: It is only the power of the raised fist to invoke fear and unleash retribution that is of consequence.

While opposition was relatively muted - whether in the arts, on the streets or the benches of parliament - the ANC could maintain the pretense of supporting the concept of a constitutional democracy, one in which robust criticism can flourish. Now the party is under siege, both internally (through its vicious faction fights) and externally, thanks to ebbing support, increasing disillusionment at persistent poverty and a growing political opposition.

Will a gallery in South Africa ever again be brave enough (or even be permitted) to display art condemned by the powerful as outrageous? Or will controversial culture be exported — onto the web, and to exhibition spaces abroad? Are our artists to become exiles once more, hounded for daring to question or expose?

Freedom is difficult, sometimes painful. Freedom guarantees being able to question, comment, criticize - even if by doing so insult and outrage is the result. Art must provoke, must make us argue and discuss - even if our feelings get a bit bruised in the process. If we are so fearful of causing offense, we will become blinkered; how can we search for truth, or inspire debate, if we are so afraid of the consequences?

“The norm” needs to be constantly unpicked and explored, and the powerful scrutinized. Not long ago, slavery, denying women the vote and jailing gays was “the norm.” It was through exercising freedom of expression, culturally and politically, that these practices were banished (although tragically in some parts of the world today these practices are still considered acceptable).

In a country in which rape and the abuse of women and children are rampant, it is vital that we have a conversation about gender, power and patriarchy. It is vital that art catalyses a discussion on the way women are treated, and a discussion about the need for us all - male and female, black and white - to promote gender equality and the empowerment of women.

The backlash against The Spear threatens to silence that much-needed discussion. The ANC’s and its supporters’ rhetoric implicitly suggests that commenting or critiquing the president’s version of masculinity and the actions that stem from it is simply taboo — especially if the critic is white.

If genuine freedom and equality for all South Africans is to be attained, no culture should be sacrosanct or off limits. Rather they should be interrogated and explored.

This week South Africa’s largest news site, News24, voluntarily removed an image of “The Spear” not long after City Press, the Sunday newspaper embroiled in a legal battle with the ANC over the image, took it off its website too.

News24 claimed it was doing this “in a spirit of healing and nation-building.” This is, at best, misguided. Nation-building is defying those who seek to dictate what is culturally acceptable and what is not. It is standing up to attempts to quash creative expression. Nation-building is fighting for the rights enshrined in our Constitution. In the long term, little can be gained (least of all “healing”) by surrendering to intolerance.

South Africa will not overcome fear by giving into it. The nation can only grow if the right to provoke, question and criticise is vigorously defended.