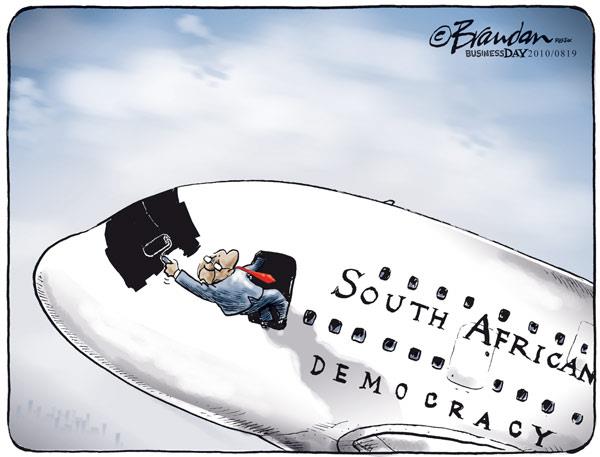 Owner of Goodman Gallery turns to the press

Liza Essers, the director of the Goodman Gallery, a Johannesburg institution presently caught in a media-storm centred around artist Brett Murray, has given a long interview to Art in America, giving her opinions regarding the events that have taken place since 13 May 2012.

Remarkably, she stated that problems began on 13 May, when the South African minister of arts and culture rang her to ask about her “intentions” for the exhibition. She invited the politician to visit the gallery himself, but she never received a response to the invitation.

The work that created the controversy was entitled The Spear. It depicts South African president Jacob Zuma in a style reminiscent of soviet propaganda posters from the 1960s. Zuma is presented in a heroic pose, the dignity of which juxtaposes with his visible genitals. The African National Congress (ANC), the ruling party in South Africa, was outraged by the work, which they believed was a racist representation of the president, and demanded that it be removed
.
According to Liza Essers, the minister of Art and Culture did not mention The Spear during their phone conversation, rather simply the presence of several signs relating to the ANC and South African culture. On 17 May, the press seized on the story, and the ANC threatened to take her directly to the high court if the painting was not removed.

The gallery owner reaffirmed that artist Brett Murray was not at all racist, and that The Spear dealt first and foremost with politics and the abuse of power. She has also rejected the affirmation that black South Africans all had the same opinion regarding this painting, and that that painting was different to that of their black compatriots. She has, furthermore, broken the news that the ANC’s advocate finally abandoned the racism argument in court.

She went on to explain that The Spear had not created a problem regarding race in South Africa, but had revealed underlying tensions left-over from Apartheid. She has also confirmed that she had received death threats for being racist, and no longer felt able to go out without a body guard. When asked about the conditions in which she is now obliged to work, Essers revealed that she was in a state of confusion, at once thinking that this affair was extremely important for artistic liberty in her country, at the same time thinking that she was simply caught in a fever that will quickly pass.