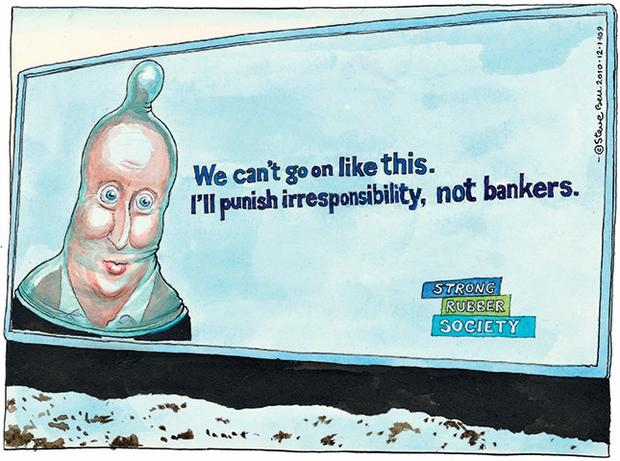 South African cartoonist Zapiro’s take on President Jacob Zuma in the Mail & Guardian
Two months after South African artist Brett Murray got into trouble with the African National Congress for depicting President Jacob Zuma with his genitalia exposed, fellow countryman and award-winning cartoonist Jonathan Shapiro, also known as ‘Zapiro’, is in hot water for caricaturing Zuma as a penis with a shower head hanging over him.

The cartoon published at the end of last week also carried a poem about Zuma, which reads: ‘Though sex is his publicized sport/Zuma took the dick-painting to court/Suing Brett’s free expression/Confirmed the impression/He’s as big a dick as we thought!’

Zapiro’s cartoon in the South African newspaper the Mail & Guardian has reignited the debate, not just in South Africa, about freedom of expression, responsibility and the right to privacy.

Obviously referring to Murray’s artwork, Zapiro’s cartoon also takes a pot shot at Zuma for his multiple marriages and extra-marital affairs but equally it is an attack on Zuma (and the ANC) for trying to stifle freedom of expression in the ‘Rainbow nation’.

The shower head hanging above Zuma, of course, refers to his defence when charged with raping a young woman in 2006 (he was acquitted) that he protected himself against HIV infection by taking a shower.

“ALL SOUTH AFRICA IS SHOCKED”

“We find it unacceptable and shocking”, read and ANC statement, “after the harsh experiences that South Africa, the President and his family have experienced a few weeks ago that Zapiro and the Mail and Guardian will find it appropriate to continue with the insults that hurt the President.” The statement went on to say that, “All South Africans are disgusted”.

The ANC took legal action against artist Brett Murray but dropped it after his painting was removed from the Goodman Gallery in Pretoria (having already been defaced by two ANC supporters).

Zapiro too is threatened with legal action, to add to the two actions that Zuma is taking against the cartoonist for separate cartoons published in 2006 and 2008.

The Kenya Forum wrote about the Marray furore at the end of May in which we argued that Zuma, as a public figure, a politician, and a man with an undoubted reputation, should ‘cool it’. In short, that freedom of expression has precedence over a politician’s sensibilities.

The late 18th and early 19th Century British caricaturist James Gillray depicted George III as ‘farmer george’ and his son, the Prince Regent, as a fat lecherous drunkard. One of Gillray’s most famous sketches showed British Prime Minister William Pitt and France’s Emperor Napoleon Bonaparte cutting up the world as if it was a pudding.

Two hundred years later the UK newspaper The Guardian regularly publishes cartoons by Steve Bell (who cites Gillray as one of his major influences) showing present day British Prime Minister David Cameron with a condom on his head.

Regrettably, the Mail & Guardian’s editor has publicly said that he thinks Zapiro’s cartoon may ‘have gone too far’. The Kenya Forum thinks not. The world is a better place because of the likes of Gado, Bell and Zapiro. Zuma is in danger of being ‘a dick’ and South Africa’s long-fought for freedoms are under attack.