Brett Murray studied at the University of Cape Town where he was awarded his Master’s of Fine Arts degree in 1988 with distinction. The title of his dissertation is ‘A Group of Satirical Sculptures Examining Social and Political Paradoxes in the South African Context’. As an undergraduate he won Irma Stern Scholarships in both 1981 and 1982. He won the Simon Garson Prize for the most Promising student in 1982 and was awarded the Michaelis Prize in 1983. As a postgraduate student he received a Human Sciences Research Council bursary, a University of Cape Town Research Scholarship, the Jules Kramer Grant and an Irma Stern Scholarship.

He has exhibited extensively in South Africa and abroad. From 1991 to 1994 he established the sculpture department at the University of Stellenbosch, where he curated the show ‘Thirty Sculptors from the Western Cape’ in 1992. In 1995 he curated, with Kevin Brand, ‘Scurvy’, at the Castle of Good Hope in Cape Town. That year he co-curated ‘Junge Kunst Aus Zud Afrika’ for the Hänel Gallery in Frankfurt, Germany.

In 1999, Brett co-founded, with artists and cultural practitioners Lisa Brice, Kevin Brand, Bruce Gordon, Andrew Putter, Sue Williamson, Robert Weinek and Lizza Littlewort, ‘Public Eye’, a Section 27 company that manage and initiate art projects in the public arena with the aims to develop a greater profile for public art in Cape Town. They have initiated projects on Robben Island, worked with the cities health officials on aids awareness campaigns and initiated outdoor sculpture projects including ‘The Spier Sculpture Biennale’. He curated ‘Homeport’ in 2001 which saw 15 artists create site specific text based works in Cape Town’s waterfront precinct. Public Eye have interfaced with cultural funding bodies as consultants and hosted multi-media events across the city.

Murray was included on the Cuban Biennial of 1994, and subsequently his works where exhibited at the Ludwig Museum of Contemporary Art in Germany. He was included on the group show, ‘Springtime in Chile’ at the Museum of Contemporary Art in Santiago, Chile. He was also part of the travelling show ‘Liberated Voices, Contemporary Art From South Africa’ which opened at the Museum for African Art in New York in 1998. His work formed part of the shows ‘Min(d)fields’ at the Kunsthaus in Baselland, Switzerland in 2004 and ‘The Geopolitics of Animation‘ at the Centro Andaluz de Arte Contemporaneo in Seville in Spain in 2007. He won the Cape Town Urban Art competition in 1998 that resulted in the public work ‘Africa’, a 3.5 metre bronze sculpture, being erected in Cape Town’s city centre.

He was nominated as the Standard Bank Young Artist of the year in 2002.

He won, with Stefaans Samcuia, the commission to produce an 8 x 30 meter wall sculpture for the foyer of the Cape Town International Convention Centre in 2003. In 2007 he completed ‘Specimens’, a large wall sculpture for the University Of Cape Town’s medical school campus. In 2011 he produced the public artwork ‘Seeds’ for The University of Bloemfontein and in 2013 he was commissioned to produce the 7 meter bronze ‘Citizen’ for the Auto & General Park in Johannesburg.

His video installation ‘Triumph’ was included on the South African Pavilion at the 56th International Art Exhibition -la Biennale di Venezia in 2015.

He lives in Cape Town with Sanell Aggenbach and their two children.

Murray’s work is housed in the following South African and international public collections: 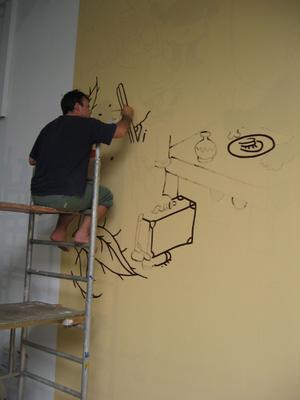