I thought it would be informative to include a few notes about this show which might help to define the formal and conceptual framework within which I have been working. ‘White Like Me’ merges the thematic concerns pursued in two of my past shows - satirical attacks on bad government (pre-1994) and attempts to define an often discombobulated sense of identity. The comic and the tragic walk hand in hand in this sad and hilarious country.

The works on this show are mostly flat metal and plastic wall sculptures which take, as their starting point, single-frame cartoons from old ‘New Yorker’, ‘Spectator’ and ‘Punch’ magazines. The working title for this show was ‘The New Yorker does Benoni’ and I intended using only the familiar comic leitmotif of two navel-gazing (white) drunks at a bar. By inventing new dialogues between them I hoped to articulate my own ironic take on the South African social landscape. The idea of changing the text of existing images reminded me of a weekly competition that ran in the ‘Pretoria News’ when I was younger. Readers were provided with an image and invited to supply “funny” copy. I entered a few times but my text was probably a little rancid for publication. The pieces on exhibition also recall the work of Glen Baxter as well as the 80’s comic ‘BIFF’. Richard Prince’s comic non-sequiturs provide a more highbrow reference.

My show, ‘White Boy Sings the Blues’ marked the beginning of a shift in my work. My concerns moved from external issues of bad government, power abuse and the like, to a concern with notions of identity, memory and to defining a psychological sense of place. All the works used head-shots or silhouettes as a defining locus within which the external conflict becomes an internal debate. ‘Land’ looks at ideas of ownership, and the self-portrait ‘White Boy Sings the Blues’ attempts to articulate a sense of self within the hegemony of power relations and concomitant stereotypes. Other works attempted to unpack shifting notions of truth and memory. The Truth and Reconciliation Commission had just kicked in, and in a later work, ‘Crisis of Identity’ , I look cynically at this process of self-analysis. Identity seemed to have become the mating call of many artists and intellectuals at the time. Despite my cynicism, I have returned to this pursuit and have attempted to re-draw those battle lines in this new body of work.

The often critical and hopefully entertaining explorations of cultural identity described above look back to even earlier works of mine, such as’ Warrior’ and continue in ‘White Like Me’. The title of ‘Black Like Me: Colonel Sanders’, which extends the thematic concerns described above, was inverted to give me the title for this show. Here, a patriotic limbo-land is described where language is seen as a defining divider and the cultural disjunctures I explore are intended to provoke. ‘Mantra’ an earlier work, began this investigation while ‘Rich Boy’ was a warning shot. The white face of capitalism is apparently legitimised by the black face of capitalism.

This sense of continuity is presented in ‘White Like Me’ where I hope to articulate, amongst other things, a simple warning: fascism and, ironically, racism are not colour-specific. 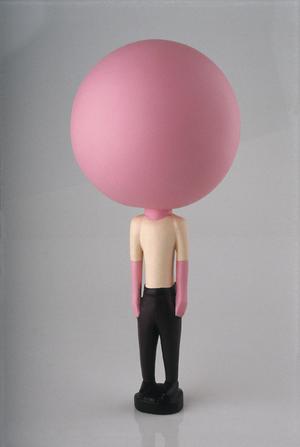