Scurvy, an exhibition at Cape Town’s Castle, penetrates the heart of that archetypal symbol of colonial authority. Interesting things are happening in the Cape Town Castle. Currently it is the site of an outbreak of Scurvy. Its pathology is concerned not so much with tenderness of the gums, but a subcutaneous eruption of another kind. Scurvy is the name of an exhibition by the self-styled Secret Seven in collaboration with the William Fehr Collection at the Castle, whose curators deserve credit for allowing this stretching of the military mind-set. The Secret Seven? What does this conjure up,a visual equivalent of the Dead Poets’ Society? High jinks and iconoclasm behind the castle walls? Well, that’s partly so, but there’s more to it than that. The seven (Wayne Barker, Kevin Brand, Barend de Wet, Andrew Putter, Kate Gottgens, Lisa Brice, Brett Murray) were all Michaelis students in the 1980s , the so-called protest decade, when lines of difference between “them” and “us” (state and opposition) were clearly defined. And when an art school was the one place that provided a supportive environment to allow you to line the enemy up in your sights and let rip. It is one thing to do that within the protectiveness of an art school womb. It is something else to get out into the world and continue rocking the boat. Which is more or less what all of them went on to do. Though they share no common style, a gutsy irreverence linked them then, and continues to do so now.

As a group show, Scurvy contains more spunk, wit and visual energy than any comparable show I can think of in a long time. On its own terms it makes vast tracts of the Johannesburg Biennale look tame. In effect it takes off where the Biennale Laager ended. That circle of containers, conjured together by Barker, was, of course, on the fringe of Newtown. This show penetrates the heart of Cape Town’s Old Town, its archetypal symbol of colonial authority, the Castle itself. ?Locating the show in the Castle carries with it a double-edged irony. The one edge is more obvious than the other. Here is the bastion of power penetrated by an artful Trojan horse out of which seven iconoclasts have spilled to question and lampoon the whole colonising process, its hierarchies, its stereotypes its icons, its sacred cows. Here is the guardian of that very vegetable garden that was meant to provide the means of combating scurvy (the debilitating disease which, among other things, impeded maritime empire building), breached from within. ?The other edge cuts more subtly, perhaps even more sharply. It brings home the paradox of site-specific art installations of this kind. The signals coming from the works question the value system symbolised by the Castle as institutional guardian. Yet were these works to be seen anywhere else, in a commercial gallery, say they would lose much of their point, and a lot of their power. ? The Castle has provided some superb spaces which the artists have been quick to exploit. Thus the paradox.

The material culture which the Castle represents, in all its spare, military elegance, gives resonance to the very work which seeks to undermine the value system that caused the Castle to be built in the first place. This is not to say that the Castle space neutralizes the barbs in the work; rather does it set up a kind of creative tension. Thus seeing Barker’s huge floor installation in one of the earliest sections of the complex (B Block, originally a church and restored in the 1840s as the British Officers’ Mess)gives the experience a certain frisson that it would not have had in a neutral setting. Barker calls his piece World; it is nothing less than a giant world map with the continents defined by bottles, the Cape by a neon VOC sign, and, this is the point, the oceans by surplus army uniforms. In its context the uniform metaphor. ??You reach the map by way of an antechamber containing Barend de Wet’s resin-cast of himself in the nude. Sculpture of the Artist as a Sculpture. It is the same one that we saw at the Biennale in its shipping container. Here it stands, heralding the scurvy theme, set in a sea of oranges. It has a different kind of impact here, an installational Jonah Lomu stopper, where the oranges perform the role of spiked naartjies.?Immediately below this, in the basement, is the most affecting installation of the show, Kevin Brand’s Boys. This consists of 17 identical papier mache figures,life-size, but volumetrically stylised, laid on wooden racks or propped up against the walls. They look like victims of a bomb blast, excavated from the ruins of some undetermined disaster. Their number may refer to the 17 Heeren who ran the Company, but their provenance seems linked to another kind of running — an earlier piece by Brand called Nineteen Boys Running; the effect of Brand’s installation is stunning in its economy of means and immediacy of impact.

On an upper level Lisa Brice and Kate Gottgens take on the notion of castle as metaphor. Gottgens, who has, since her student days, knowingly walked the thin edge of kitsch as kitsch and kitsch as parody – presents, in her words, “visions of castles using the language of the dispossessed”. Brice takes her texts from the Yellow Pages where suburban paranoia is catered for by the burglar-bar industry, “Make your home your castle …”, “Your home is your castle … protect it”. Her objects probe domestic angst as one would an aching tooth, embroidered cushions with flying squad telephone numbers, burglar bars that spell, depending on whether you are inside or out, “Relax” or Voetsak”.?Andrew Putter, in a darkened room, focuses on the homoerotic gaze and the “secret (sometimes dangerous) ways we’ve found to take our sexual pleasure in a homophobic society”. His presentation centres around hidden inserts of male pin-ups in hollowed books. We’re in the Castle, remember.

When I visited the show, there were indications that official homophobia was beginning to surface. But tolerance seems to have prevailed. The artist, disarmingly, claims to find ambient army uniforms sexy. Finally, Brett Murray, an accomplished ironist, employs cross-cultural references (pink panthers in Perspex with Zulu shields) towards an understanding of shifts in power and celebrations of change. Shifts in power. This is where the problematics of the Secret Seven’s Scurvy really come into focus. Here we have a group of gifted artists who were schooled in the 1980s when the enemy was clearly identifiable. It hardly needs to be spelled out that the situation in the mid-1990s, when even the president,especially the president, wears a Springbok rugby cap, has somewhat changed. Symbols acquire different meanings. What remain of the sacred cows of apartheid South Africa have become instead the Aunt Sallies, or Oom Sarels, nicely lined up in the post-colonial shooting gallery. Sitting ducks, to mix the metaphor. In these terms, then, the Scurvy show may be seen as a kind of celebratory shoot. Fine and good. This is unique moment when we can join in the deflation of the cows, the celebration of the toppling of the icons of past authority. But that does not mean there are not other targets that will demand the attention of socially critical artists in the politically correct new South Africa, or that the targets are going to remain, as they are now, conveniently static. I have the feeling the Secret Seven know this, and will keep their critical vision sharp, their weapons primed, and their powder dry. ? 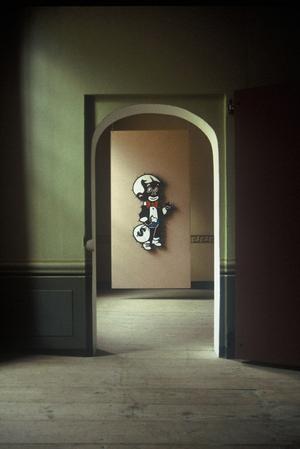