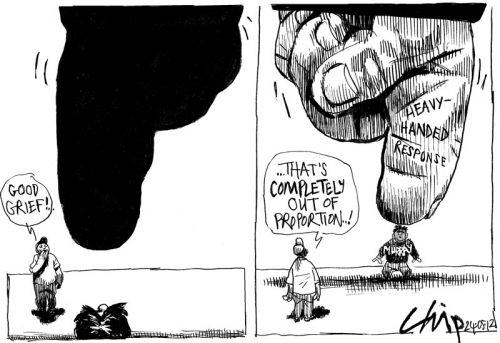 You are obviously one of the country’s most respected editors and perhaps even, as Peter Bruce, editor of Business Day, rather perceptively observed in his column today, possibly the country’s first truly celebrity editor. Your heart is in the right place, and it is little wonder that, filled with compassion for the hurt many have felt at the sight of The Spear (the art work, not the real thing of course!), and fear that some might burn more of your newspapers, hunt you down or kill your vendors even, you decided it is best to take down the image from your website. And you have now done so.

I must admit, however, that I think you made a GIGANTIC mistake. You did the wrong thing. Political bullying, and disrespect for the Bill of Rights, won this morning. Media freedom, I’m afraid, is the loser, and our democracy is worse off for the decision you have taken. Of course, your article explains the relentless pressure you have felt. It reads like a Sylvia Plath poem and seems like a pretty good self-preserving reason for bowing to pressure. No one likes an existential crisis. And Koos Bekker, your big boss, doesn’t like a dent in profit. But you’re meant to be our principled celebrity editor, Ferial. Dammit!

Let me make my points bluntly for why I think you wrongly dropped The Spear’s balls. This should make for ease of (dis)agreement, I hope.

First, it is not true, as Peter Bruce claims, that taking down the image is in the “national interest”. It is (narrowly) in the interest of Jacob Zuma, his family, his supporters, some in the African National Congress who feel insulted, and members of the public who feel the same. But deciding on national interest is not an exercise in simply determining how the majority feels and endorsing those feeling willy-nilly. By that logic, it is “in the national interest” to chuck out the rights of gay people, to bring back the death penalty, and to allow teachers to smack kids in our schools.

That’s not responding to the “context” in which your paper exists, Ferial. That is affirming, uncritically, what a vocally dominant bunch says. We should now be mature enough to havecritical dialogue. This mean asking yourself whether “national interest” is really about satisfying the whim of an angry segment of your readership, or even an angry majority in society-at-large. Worse than this, Ferial, consider whether national interest should be politically decided, depending on what Gwede Mantashe (the ANC’s secretery-general) had for breakfast, or how cool headed their spokesperson, Jackson Mthembu, happens to be when he reaches a press briefing?

Second, I think your decision to take down the image undermines your own front page story in yesterday’s City Press. You ran an accurate, and very important, cover story that tells us that not all blacks think the same and that not all ANC or alliance politicians think the same. This is why you chose the headline, “Spear divides ANC”. And you’re right.

For example on The Justice Factor Paul Mashatile (our minister of arts and culture), for example, had a very different take on this issue to Mantashe’s and to that of minister of higher education, Blade Nzimande - who has called the painting an assault on the black body. (Let’s aside the fact that Jacob Zuma’s body is his. It is not every black man’s.)

Mashatile’s tone more measured, he showed no anger, and he said that there was no ANC “debate” on whether to boycott your paper. His own preference, he said, was for “dialogue” even though he, too, regards the painting as offensive. Similarly, that brilliant old timer, and ANC intellectual heavyweight, Pallo Jordan, also defended the artist’s right to artistic freedom on last night’s episode of Interface on SABC3, even while explaining that sensitivity is important on the part of artists. And, in an interview in your own paper one of our best writers, Zakes Mda, was scathingly brilliant about Zuma’s inability to live with being offended. Mda also denuded silly suggestions that, uhm, nudity is something only white artists dream up. (Mda’s article was particularly lekka for showing up the basic ignorance in many critics’ viewpoints, borne out of little or no familiarity with art.)

Here’s my point. By climbing down on this issue – and following the sentiments of editors like Peter Bruce – you actually do all of us, including black South Africans, a huge disservice. You make it seem – yes, yes, it wasn’t your intention Ferial! – as if you woke up this morning and thought, “My good God, they are sooo angry, I had better not hold them to the high constitutional standards I preached last week, if I want to still be alive next week!” I know these are not your literal words. But, alas, Brett Murray is not the only one who produces works open to interpretation, filled with ‘sub-texts’.

As editors, journalists, writers and columnists, our speech acts – our words –are also subject to interpretation.

And so I am sorry to add to your headache by saying that just as Mantashe, Zuma, Nzimande and Jackson – The Big Men Of Politics - were offended by your decision to keep the image on your website, it is my turn to play the “I’m offended!’-card. I am offended – cough – that you have such low expectations of angry readers, and angry politicians. I am offended that you did not take seriously your paper’s own recognition that not all blacks think the same, and many of us have your back covered, including many ANC politicians even. Hence my examples of black men who have either clearly supported you (like Mda) or politicians who showed that they can explain being offended by the art work but live with being offended (Mashatile and Jordan).

The right to dignity, as you know, does not include the right to not be offended. This is why Zuma’s case is legally impotent. They should have mounted (as it were) a defamation case or a hate speech one under the Equality Act.

But of course their legal advisers are not the sharpest tools in the legal shed. (Those legal strategies would not have worked either, but had marginally better prospects.) Constitutionally, we have to set a precedent which makes it clear that being ridiculed by an artist is legally allowed. Mashatile gets this. Jordan gets this. And no doubt many other politicians not yet interviewed on this issue, get it too. Your decision robs us of an opportunity to entrench, legally, the meaning and implications of artistic freedom. The aesthetic merits of the work are beside the point.

Bad art, like bad politicians, are allowed to exist. That’s the point of democracy. One can only hope there isn’t a retreat from Murray or the Goodman gallery.

Oh, and by the way, many people think Murray’s art feeds into a white supremacist history of reducing black men to their rampant sexuality. I actually think your self-censorship feeds into a white supremacist history of lowering expectations of what black people can handle. The modern version of “Don’t teach them maths because they won’t get it” seems to be “Don’t demand of them what you would demand of a cosmopolitan, progressive, educated white person – tolerance of artistic freedom - because ‘they’ won’t get it!”

And yes I KNOW you “did not intent” to say this. I know! But we have seen from the artistic rebukes of Murray from critics like Gillian Schutte that it is ok to ignore intention and simply dump an art work into the annals of racist art’s history because, you know, an exposed penis is sufficient to justify the racism card making a not-so-rare appearance in public debate.

So pardon me, therefore, if I am being equally ungenerous in placing your reasoning in the “context” of white supremacist editorials and columns from years ago that you might not have had in mind this morning when you took your decision. I am just being “historical” in ignoring your intention, and saying you’re playing into an ‘anthropology of low expectations’.

Don’t condescend black South Africans – hold us to a high standard, and don’t take us seriously when we bully you. We’re trying our luck, and in this case you caved in. Next week, Gwede will be back, and then what? You must be “brave’’, Ferial, as many say you are, and let go of the prospects of being liked by everyone. Rather be respected for consistency and principled editorial decisions; its way cooler. Seriously dude.
As we say on twitter, a platform you love too, #JustSaying.
Yours in “robust debate”
Eusebius McKaiser

Ps Speaking of twitter, feel free to follow my counter-revolutionary tweets @eusebius and in the interest of “dialogue” you can freely share this letter in City Press. (Don’t ask Koos Bekker’s permission.)