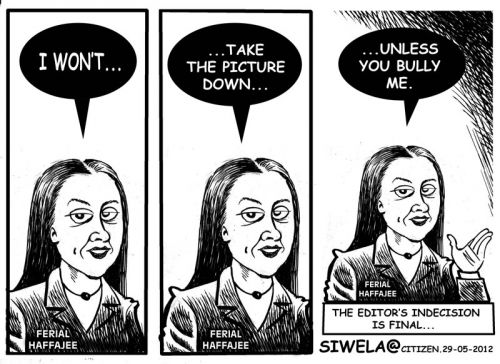 My friend’s daughter shocked her mum the other day.

“Pucken assils,” the cherub shouted at a barking dog that had given her a fright. She replaces her F’s with P’s.

“Assil”, her mum tells me, is arsehole. Out of the mouths of babes!

Many times this week, I found myself mimicking the little angel when the dogs barked.

So, who led us in the frightening necessary fortnight we have come through?

I know who has led me: my brother writers Justice Malala and S’Thembiso Msomi, who rose their pens above the din and explained how The Spear (16N) had exposed intergenerational pain and outrage at humiliations that stretched from colonial times to recent memories of apartheid.

This week we publish personal and political journeys undertaken in this fractured fortnight, again turning to our writers to guide the country forward.

This is the power of words, the function of writers. Long may they live and lead.

Many ANC members and supporters have led when they phoned to say they were buying multiple copies of City Press.

Even though almost all of them abhorred the image painted by Brett Murray (16N), they valued their freedom to read and despised an instruction from the ANC to boycott.

I’ve been led by Cope’s Mosiuoa Lekota who, with broken arm and all, reminded me that my president should have spoken up for City Press as we faced a boycott and bullying.

“The president, as the main defender of the Constitution, failed Brett Murray, Ferial Haffajee and Liza Essers (owner of the Goodman Gallery),” he told Parliament.

And I’ve been led by the young woman I met at a colloquium on free speech this week who asked me why we had taken down the image. “I bought four copies,” she admonished me.

The ANC no longer leads. It rules. And it governs (sometimes), but lead it does not.

The ANC, at the zenith of its leadership, was magnanimous and gracious in power. It created a nation from the balkans of apartheid.

“This is a watershed moment for all of us. Our decisions and actions will determine whether we use our pain, our grief, and our outrage to move forward,” he said at the time.

Biographer Richard Stengel recalls telling Madiba that he was a dull speaker. To which he replied: “You know, I try not to be a rabble-rouser.”

It’s a lesson lost on ANC secretary-general Gwede Mantashe, who this week told a march outside the gallery that “your power brought down the image”.

He exercised raw power instead of using the moment to be a statesman, and to pull the nation towards itself and to embroider the Constitution’s tolerance and mutual respect with personal practice, as we tried to do at City Press.

Higher Education Minister Blade Nzimande insisted on the destruction of the painting, not satisfied with its defacing.

His acolyte, Buti Manamela of the Young Communist League, went further, saying all the work on exhibition should be destroyed.

What was billed as a march for human dignity became a show of power and a vengefest, a display of communist machismo as Rapule Tabane wrote in the Mail & Guardian on Friday.

It was an epic failure of leadership from a party with a rich history of progressive vanguardism.

The three reminded me of the leaders of Hutu Power, the movement that whipped up the posses responsible for the genocide of Tutsis in Rwanda.

No matter. In times of leadership paucity, good societies birth stewards anew who know the service is to the beloved country, not to naked ambition.

Let these new leaders show their faces; let them lead with love.