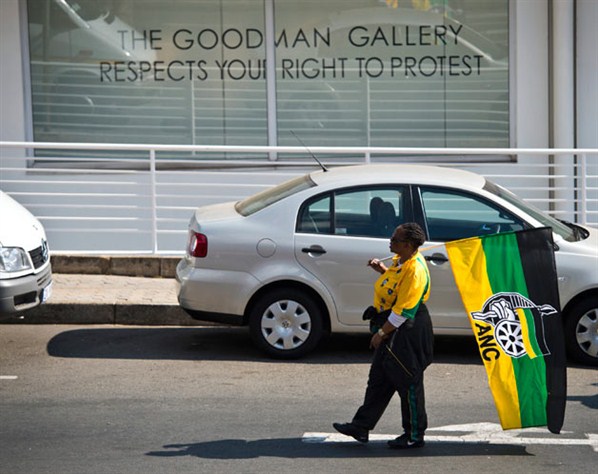 Murray has the last laugh

A Tarot card depicting the fool. An artist, espcially a satirist, is rather like the king’s fool.

lUCINDA JOLLY comments on the context and satire of Brett Murray’s The Spear painting from the Hail to The Thief II exhibition.

SO MUCH of the context of Brett Murray’s controversial painting has been lost in the heated response to it.

It might be helpful to move away from the current hysteria and revisit the actual context of the exhibition and touch on the nature of satire, Murray’s chosen oeuvre.

Primarily a literary form, satire is thus defined by the Encyclopaedia Britannica: “Vices, follies, abuses and shortcomings are held up to ridicule, ideally with the intent of shaming individuals, and society itself, into improvement.”

Satire doesn’t have to have humour. But humour helps swallow the bitter pill of criticism more easily.

The artist, especially the satirist, is rather like the king’s fool: the one who dares tell it like it is. The fool began as the juggling buffoon in medieval times, developing into the more complex role of commentator found in Shakespeare’s dramas.

The fool, like the satirist, is a peripheral creature and his lonely role is steered by the conviction of his own moral compass.

It’s no mistake that the traditional Tarot card often depicts the fool with his head turned towards a dog (who represents the demands of the world) nipping his heels and inching him precariously close to a precipice of which he is unaware.

Few can tolerate their reflection in the mirror of criticism, which is what can make it so dangerous for the fool, or satirists, especially in an insecure society.

Humour is the balm and glue that allows the fool to keep his head and not have it lopped off by an angered monarch.

Culture is not fixed and yet is so often used expediently to gain the upper hand when all else fails. The role of the satirist is not restricted to Europe.

The earliest forms of satire have been traced closer by, on our own continent going as far back as ancient Egypt.

As the barometer of society, satirical works are not intended to be liked or comfortable, but their role is vital to the health of society, airing uncomfortable issues and concerns and generating discourse.

A secure society is able to tolerate diversity.

Kleptocracy is defined as a particular type of “political and government corruption where the government exists to increase the personal wealth and political power of its officials and the ruling class at the expense of the wider population, often without pretence of honest service”.

The Surrealists, in particular Salvador Dali and René Magritte, used a device called the visual pun. Magritte’s painting of a pipe that is titled Ceci n’est pas une pipe (This is not a pipe), is an example of this device. It’s not a pipe because it is a painting of a pipe rather than an actual pipe. Same goes for The Spear.

Here Zuma is caricatured as the charismatic Lenin, one arm outstretched in an oratory gesture which is based on the 1967 poster Lenin lived, Lenin lives, Lenin lives forever by Russian socialist- realist painter Victor Ivanov.

Likewise, the highly schematic genitals depicted in The Spear are not Zuma’s own on two counts. First, the artist has no idea of what they really look like, they are symbolic. Second, all visual representations are only approximations of the real thing and can therefore never be the real thing.

The image is a pun on the president’s behaviour.

The criticism is not personal and doesn’t relate to Zuma’s roles as a father, husband, son, brother or friend.

It is critical of him in his role of president. It’s his persona.

As with movie stars, presidents are public property and their rise and fall depends on their popularity with the people.

When Zapiro once asked Madiba how he felt seeing cartoons of himself being parodied, the great man responded with the characteristic evenness of 27 years of self-reflection with something to the effect of “you were doing your job”, just as he was doing his job of being president.

Granted, the closest Zapiro showed Madiba being exposed was in skimpy running shorts. Respect is not an entitlement. It is earned, just as one earns one’s particular satire.

Also, Madiba’s generation are the last of the highly educated, intellectual ANC office-holders. They don’t take things so literally or so personally and can laugh at themselves. Humourless people are far more dangerous.

Finally, the worst thing you can do is to ignore the work of a satirist. All the hoo-ha indicates a profound lack of political astuteness.

Murray has achieved every satirist’s dream – strong reaction and response and the global spotlight.

Whereas his protagonists have totally exposed themselves.

The satirist, like the fool, exposes people’s vagaries – not out of hate, but because he cares deeply and is very troubled by what he sees.

If he didn’t, he wouldn’t bother to risk the precipice.

Like the fool, the satirist “provides truth, balance, play, recreation, destruction, creation, change”. He is “the destroyer of our well-ordered world and the creator of the new through play. It is by change that we are made new. Let the fool lead the way”.

Maybe Zuma should employ the services of a fool instead of another wife.