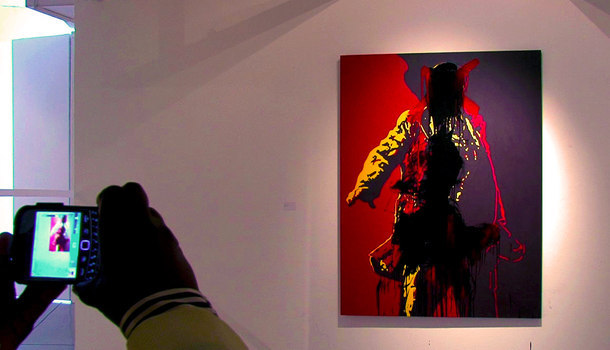 ‘The Spear’ returns as gallery takes on classification

The Goodman Gallery has appealed a ruling that children should be protected from the ‘Spear’ painting, saying the FPB does not have the authority.

The Film and Publications Board (FPB) erred in assuming it had the authority to age-rate a work of art, the Goodman Gallery said on Tuesday, and also in classifying The Spear as unsuitable for people younger than 16 on the grounds of nudity.
These are the main arguments on which the gallery will now challenge the FBP rulings, in an internal process that could well be a precursor for a high court challenge.

City Press, which voluntarily removed a picture of the controversial paining from its website, said it – and civil society in general – needed to ask some tough questions of the FPB, including why the identities of classifiers responsible for the decision were withheld from the public.
“We have to secure a ruling from them that they don’t have rights over the media,” said City Press editor-in-chief Ferial Haffajee. “That is the most dangerous thing, that the FBP assumed authority over the media.”

But the remarkably speedy process with which The Spear was classified also raised a number of questions about the conduct of the FPB in the matter, she said.

“The bigger issue was the behaviour of the CEO and other people acting in an extremely partisan matter and for that we have to ask for an explanation,” Haffajee said.

“There were numerous governance breaches and there doesn’t seem to have been any disciplinary action yet.”

Limited in law FBP chief executive Yoliswa Makhasi recused herself from The Spear matter after commenting on Twitter that newspapers were trying to bar the board “from publishing the classification decision”, one that had not been made at the time.

During a hearing on whether the painting should be classified, FPB legal manager Sipho Risiba implied that the board had a duty to prevent criticism of political leaders, before saying he had merely been asking a question and had been misunderstood.

City Press has not yet filed an appeal but Haffajee said it would be acting on the matter shortly.

The Goodman Gallery said in a statement that its appeal was on the grounds that the FPB failed to recognise The Spear was a work of art, with constitutional protection for freedom of expression of the artist.

It also said the board had made a mistake by taking into account “sensitive adults and broader issues of dignity” while being limited in law to the protection of children. The gallery “is confident that the lawfulness of the decisions of the board and classification committee will be thoroughly considered by the appeal tribunal,” it said.

Exhausting internal mechanisms of appeal is a prerequisite before a party dissatisfied with the ruling of a tribunal such as the FPB can turn to the courts for a full judicial review of proceedings.