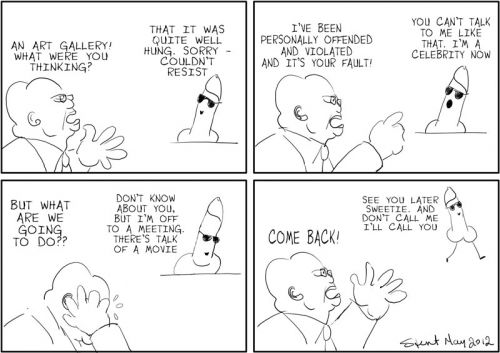 Cape Town artist Brett Murray has chosen to remain silent as the ANC takes its battle to have the Jacob Zuma painting removed from the Goodman Gallery to the Johannesburg High Court.

Yesterday hordes of people were queuing at the Joburg gallery to see the painting, called The Spear.
But the ANC is less than impressed.

Spokesman Jackson Mthembu said the party was approaching the courts “as a last resort”, after efforts to convince the gallery to remove it had “fallen on deaf ears”. The urgent application is set to be heard on Tuesday.

It can expect a fight, because the gallery has indicated it will oppose the application. It says it cannot give up its right “to decide what art will hang on our walls”.

“We provide a neutral space in which dialogue and free expression is encouraged. In this space the ANC’s right to condemn the work is acknowledged, as much as the artist’s right to display it,” it said yesterday.

When contacted, Murray would say only that he was not prepared to comment.

The painting went on display 10 days ago as part of Murray’s Hail to the Thief II exhibition.
The gallery says it will stay up until the exhibition closes on June 16.

“Given the protection for artistic freedom in the constitution, and the many exceptions in our law made for the expression of such artistic creativity, I am almost 100 percent certain that the ANC’s proposed legal action will not be successful,” he said.

He was also scathing about the ANC’s ability to distinguish between a work of art and real life, saying this would “probably ruin(its) legal case”.“As this is a work of art, there is no chance that any half-decent judge would grant the orders requested by the ANC,” De Vos predicted.

The court papers were served on the gallery on Friday night, and Mthembu said they sought to interdict the gallery from “displaying and exhibiting” the “offensive and distasteful so-called portrait”.

But De Vos said there was no place in SA’s democracy for “this kind of Christian Nationalist-like moral outrage, and the concomitant attempts at censorship of artistic expression”.

“All the ANC has done is to make themselves (and our president) the laughing stock of the country,” he wrote.

The 1.85m-high painting, which is a parody of a propaganda poster of former communist leader Vladimir Lenin, was bought by a German collector for R120 000 plus VAT.

The gallery said yesterday that it would be transported to the new owner at the end of the exhibition.
The gallery defended its decision to allow the artwork to stay, saying Murray had “for decades recontextualised familiar images and phrases in order to challenge perceptions and trigger dialogue”.

“Brett’s depictions of our country’s president and ruling party are thought-provoking, and have certainly stirred a dialogue in South Africa.”

Yesterday Afrikaans paper Die Burger quoted Murray speaking about the painting some time ago. He was quoted as saying that “when you break the rules that you pretend to honour, and on top of that you’re a public leader like Zuma, then the hunt is on for political commentators”.

He further said there was “so much disappointment, within the ANC as well”, and that people were afraid to articulate their frustrations for fear of retribution from party structures.

Goodman Gallery director Liza Essers has previously come out in support of Murray’s right to freedom of speech and expression, although Mthembu’s view is that the artist violated Zuma’s rights to human dignity and privacy.

But De Vos said the constitutional right to freedom of expression included freedom of artistic creativity.
He pointed out that there was no SA law that prohibited an artist from making such a portrait, and said that if there was such a law, it would be unconstitutional.

She added that Murray’s work ranged from an “exquisite pair of gold-plated knuckle dusters with VIVA enamelled in red on each, to some distinctly unflattering representations of Zuma”.

The ANC Women’s League, Cosatu’s Gender Committee and SACP Women’s League joined those who expressed their detest to the painting.

“The painting is not only an insult to the president and to the ANC, but to all the South Africans who have been subjected to their president portrayed in this sexual manner,” a joint statement read.

Arts and Culture Minister Paul Mashatile also urged artists to respect the rights of others while they exercise their freedom of expression.

Social networks were also abuzz with comment about the painting.

Cosatu general secretary Zwelinzima Vavi tweeted: “That painting can only be a work of a very sick mind full of hatred reflective of the damage our apartheid past caused to our society.”

Author Zakes Mda wrote: “As a person whose work was banned by the previous oppressors I’m against censorship even for those works that are not to my taste.”

Other expressed their disappointment at City Press for publishing the painting and putting it up on its website.
MissL37 wrote: “#zumaspear do journalist think moral r reserved 4 some & not them? @ANC tis time 2fight the disrespect! U hv the power they only hv mouth.”

It is now in the hands of judges at the Johannesburg High Court, who will decide on Tuesday which right carries more weight: Zuma’s right to dignity or Murray’s right to freedom of expression.