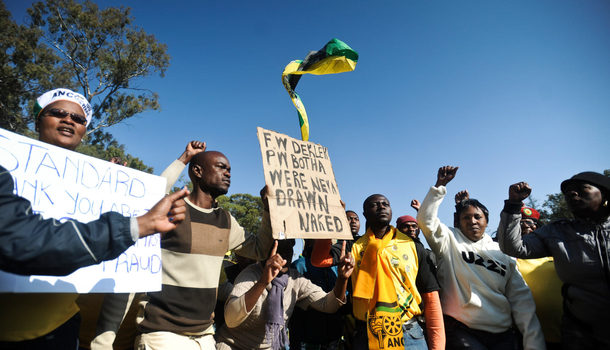 ANC forgives and forgets it didn’t get an actual apology

The Goodman Gallery and ANC will host a press conference after initial confusion over the agreement reached between the two over “The Spear”.

The ANC and Goodman Gallery will be having a joint media conference on Wednesday to provide clarity over the purported agreement made on the future of the controversial The Spear painting.

A battle of semantics erupted on Tuesday over the apparent apology the ANC received regarding the publishing and exhibition of the painting by Brett Murray.

During a protest march on the Goodman Gallery on Tuesday, the ANC claimed it received an apology from the gallery.

“They have written to us to say they appreciate the pain and suffering inflicted by this painting. Only one thing is outstanding with the Goodman Gallery, they must remove that painting from their website.

“In all the things we have demanded, that is the only thing that remains,” ANC secretary general Gwede Mantashe told thousands of supporters gathered on Jan Smuts Avenue, in Rosebank, Johannesburg.

“The City Press has removed that image from their website, apologised publicly to the Zuma family and have thus met with what we requested they do,” Mantashe said.

Mixed messages
Mantashe also claimed the gallery had undertaken to remove the painting from its website.

The ANC took to the streets after its urgent court interdict against the Goodman Gallery and the City Press was postponed in the South Gauteng High Court last week.

It demanded the image be removed from the gallery and taken off the newspaper’s website.
The ruling party argues the artwork, which depicts President Jacob Zuma with his genitals exposed, violates his right to privacy and dignity.

But, despite the ruling party’s assertions, the Goodman Gallery and City Press believe otherwise.

The gallery released a statement shortly after Mantashe’s comments, claiming his comments were untrue.

Clarity
On Thursday afternoon, the controversial art piece was still visible on the gallery’s website.

The City Press said it had not issued a formal apology, nor had it met with the ANC to discuss the matter.

Editor Ferial Haffajee said this could be construed from an open letter she wrote in this week’s paper to Zuma’s daughter, Duduzile, in which she apologised for any potential “hurt and offence” the newspaper had caused.

“I’ve written what I’ve written and that is what it is. It’s up to you to decide exactly what it means,” Haffajee told the Mail & Guardian.

When asked for clarity on his comments by the M&G, Mantashe questioned the integrity of both the gallery and the City Press, reiterating his claims that the duo had apologised.

“I don’t need to provide evidence: Ferial apologised in her newspaper to the Zuma family. The Goodman Gallery has also given a written response apologising for any pain they may have caused. To me, both of these actions are more than an apology,” Mantashe said.

Mantashe maintained the representative from the Goodman who received their memorandum at the gallery offered the ruling party a firm undertaking the image would be removed from their website.

“Everything we said at the march is according to what they said. Nothing more - nothing less,” Mantashe said.

The ANC and the Goodman Gallery are expected to give a press briefing on Wednesday.