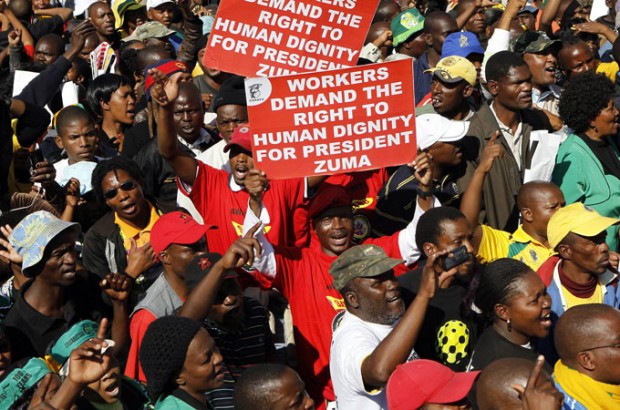 The art of marching: ANC ‘Spear’ protest hits the road

The battle against the controversial “Spear” painting moves to the streets as thousands of ANC supporters prepare to march on the Goodman Gallery.

“We are going to send out a clear message to everyone: You can criticise President [Jacob] Zuma all you like but you can’t and never will be allowed to violate his dignity,” ANC spokesperson Jackson Mthembu told the Mail & Guardian.

The ANC is seeking an urgent court interdict against the Goodman Gallery and the City Press, demanding the image be removed from the gallery’s walls and taken off the newspaper’s website, arguing it violates Zuma’s right to privacy and dignity.

The painting depicts Zuma with his genitals exposed and forms part of artist Brett Murray’s Hail to the Thief II exhibition.

After the interdict was postponed last week, the ANC called for a boycott of the City Press and called on members to march on the gallery on Tuesday.

“We have to use all avenues to challenge this painting. It doesn’t mean we are abandoning our court challenge in any way, we are simply broadening the scope of our action,” Mthembu said.

“There will be a huge contingent of police officers prepared for any eventuality,” metro police spokesperson Wayne Minnaar told the M&G.

Several businesses in and around Rosebank near the gallery have decided to close for the day in fear of intimidation and looting.

A sign has also been placed in the gallery reading: “The Goodman Gallery respects your right to protest.”

In the face of mounting pressure from the ANC and government, the Goodman Gallery has refused to withdraw The Spear, claiming their right to exhibit the artwork is protected by the constitutional right to freedom of expression.

The gallery has been closed since the defacing of The Spear last week by Barend la Grange and Louis Mabokela.

Mabokela claimed he did so to protect Zuma’s image while la Grange said he defaced the painting to prevent a race war.

‘Apartheid mentality’
Mthembu said even though the artwork had been ruined, the ANC wanted the gallery to remove the artwork.

“That picture represents an apartheid mentality of domination.

Motorists warned ahead of gallery march

It may not be complete anymore but that mentality remains and we must deal with that,” he said.
The City Press has also withdrawn the picture from its website but Mthembu said the ANC still expected an apology from the paper.

“If they manage to do this, it will say to us they realise the great pain the publication of this portrait has caused,” he said.

The march has been criticised by media organisations, with National Press Club chairperson Yusuf Abramjee labelling it a “waste of time”.

“The Spear was merely depicting what is happening in South Africa. By marching on the Goodman Gallery, the ANC is merely shooting the messenger,” Abramjee said.

But Mthembu said the ANC’s march was not about undermining the courts but rather a strategy the party hoped would press the gallery into “doing the right thing”.

“The courts must decide if South Africans can use their rights in such a way. They must decide if the right to dignity can supersede the right to freedom of expression. In the meantime we are fully within our rights to protest against this painting and will do so on Tuesday,” Mthembu said.