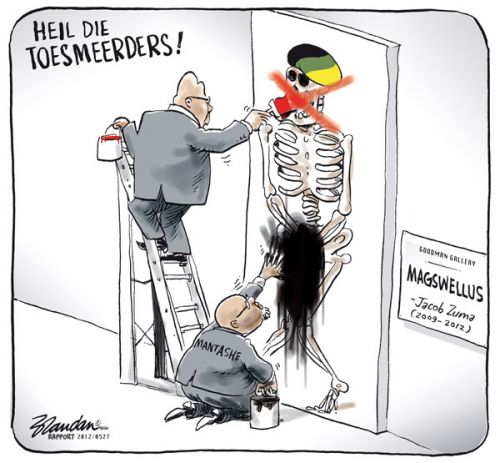 South Africa: FPB Says It Has No Jurisdiction Over Media Houses

Pretoria — The Film and Publication Board (FPB) has indicated that it does not have the jurisdiction to classify content published by media houses.

The board on Tuesday heard presentations from lawyers representing complainants, the City Press and the Goodman Gallery over artist Brett Murray’s portrait, which depicts President Jacob Zuma in an offensive manner.

Mmapula Fisha, the chief operations officer of the board, noted that the press was regulated by the ombudsman, which was not in the FPB’s jurisdiction — a view that was raised by Steve Budlender, the lawyer representing City Press, in his opening presentation.

“City Press didn’t create the artwork. They didn’t even endorse the artwork. They reported on the artwork,” argued Budlender, adding that as the media, they were acting within the prescripts of the Constitution by reporting on the matter and letting the public decide for itself.

However, Fisha said this did not stop them from taking further action, such as referring it to the Press Ombudsman. She stressed that the FPB’s mandate was to protect children and sensitive viewers.

“We cannot just fold hands and say it’s not in our jurisdiction to rule on involvement when people have made complaints - we have a mandate,” she said.

This, she said, meant that the board could only take further steps on the portrait after the classification committee had pronounced on it. A decision on the matter is expected next week.

The FPB has indicated that five classifiers visited gallery last week, where they viewed the entire exhibition. Their classification would be based on that context.

He said the portrait had the potential to cause “physiological harm”.

With regards to the Goodman Gallery, Fisha said although the board accepted that portrait had been defaced and no longer existed in its original form, and that there was no official complaint on the Gallery, they would use the complaint emanating from the gallery’s website to classify the portrait.

Matthew Welz, the lawyer representing the gallery, had indicated that the portrait had already been sold to a foreign national who had no intention to restore it. He argued that the complaints were submitted before the image was removed.

The FPB is a government entity under the jurisdiction of the Department of Home Affairs. The FPB’s task is mainly to classify films, videos, DVDs, computer games and certain publications for their suitable age viewership, and to provide viewers with enough information to make informed choices about they want to see.