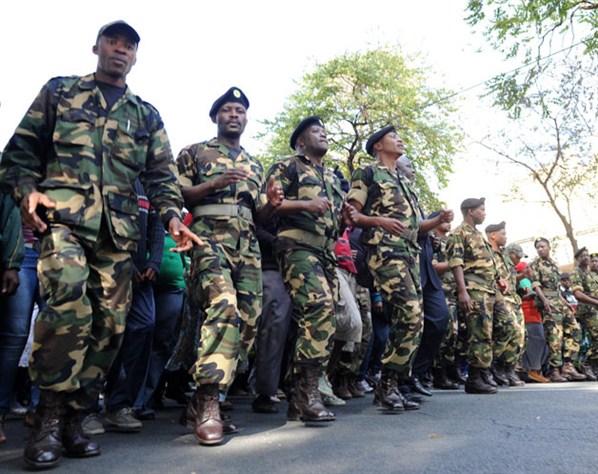 Marching to the Goodman Gallery in protest.

Passion over ‘Spear’ boils over in NUM

The Spear overshadowed the mineshaft as anger over the infamous painting of President Jacob Zuma with his genitals exposed boiled over during the National Mineworkers’ Union (NUM) congress.

On Friday, Cosatu president S’dumo Dlamini told the more than 1 000 delegates that the federation endorsed a boycott of City Press for not removing the image from its website. “Workers in this country will not buy the City Press starting from this Sunday,” he said.

The endorsement came a day after several NUM congress delegates had endorsed the boycott call by SACP leader Blade Nzimande.

Public Works Minister Thulas Nxesi slammed the painting as “sadistic” and an insult not only to the office and the person of the president, but also to millions of South Africans. “Our culture, our freedom songs, are declared as hate speech. But their insults are declared as freedom of speech. What nonsense is that,” Nxesi asked, with reference to the Equality Court case over the Struggle song that contains the lyrics “Shoot the Boer”.

He called on delegates to join the ANC’s protest march planned for Tuesday to the Goodman Gallery where the painting was displayed until it was defaced.

A protest march to the gallery – by naked men – was called for on day one of the congress by NUM president Senzeni Zokwana, who raised the painting in his opening address as an example of racism, “how certain white people regard black people”.

“You cannot publish pornography under the guise of artwork,” he said to loud applause.

However, politics was not far away and a dig at the DA followed when Nzimande said the old, racist, attitudes of white South Africans had not gone away. “It’s been botoxed now,” he said in a barely veiled reference to DA leader Helen Zille, who admitted to having the treatment to smooth out wrinkles.

Nzimande made it clear that even if artist Brett Murray had been part of the anti-apartheid Struggle, he had insulted black South Africans today. “It doesn’t matter what you did on Friday. If you insult us today, you have insulted us,” he said.

He added that “half-baked professors” couldn’t tell people how they must feel. “We tell you how we feel and we feel insulted…”

Dlamini took a similar route in his address on Friday, saying the painting was just the latest in “a pattern of liberals” and attacks.

He cited Freedom Front Plus MP Pieter Mulder’s claim in Parliament that black people had no historical claim to the Cape, former president FW de Klerk’s claim that apartheid-era Bantustans had been positive in some respects, Zille’s Tweet on “education refugees” from the Eastern Cape coming to the Western Cape and also the strategic fomentation of “black-on-black violence”.

Throughout the congress there were comparisons between the painting of Zuma and the story of Sarah Baartman, the Khoisan slave woman taken to Europe to feature in shows to titillate Victorian Londoners.

Nzimande’s boycott call was taken up by the ANC on Thursday, with national spokesman Jackson Mthembu describing City Press as “anti-ANC, the president, our democracy and the majority of South Africans”. It had placed “profiteering and populism” before values like human dignity.