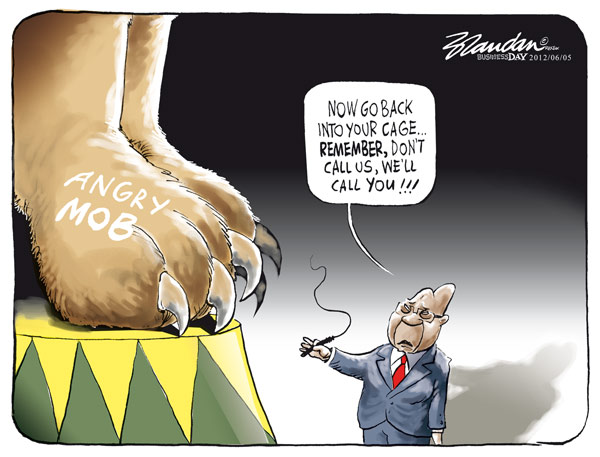 How far can artists go in satirising or sending up the powerful? Nickolaus Bauer reports on different value clashes over Brett Murray’s ‘The Spear’.

How far can artists go in satirising or sending up the powerful? That is the essence of the ­brouhaha over Brett Murray’s contentious The Spear painting depicting President Jacob Zuma with his genitals exposed in a pose reminiscent of Soviet leader Vladimir Lenin.

The ruling ANC found it demeaning, racist and a violation of Zuma’s dignity and wanted it removed.

Civil rights groups, though, hailed Murray’s piece as a sign that freedom of expression was alive and well.

By pitting two inherent constitutional rights against each other – that of dignity and of freedom of expression – The Spear has left artists, writers, comedians, satirists and social commentators divided.

Poet and writer Mongane Wally Serote said the painting was “no different to labelling black people kaffirs”. “Blacks feel humiliated and spat on by their white counterparts in situations like this. We all need to learn that, as creative people, we have a responsibility to see that our work contributes to building a new South Africa free from prejudice,” Serote said.

Satirist Pieter-Dirk Uys, best known for his fictional character Evita Bezuidenhoudt, said Murray’s piece was not necessarily satire, but it allowed people to grapple with real issues in an indirect way.

“Satire should take the unthinkable and make us recognise the absurdity of our fear of that very issue. The reaction to The Spear shows how successful it was. Not the painting, not the penis, but the fact that Mr Zuma has been asking for it. His sexual aerobics are as dangerous as [former President Thabo] Mbeki’s denials [about Aids],” Uys said.

Renowned comedian Loyiso Gola agreed with Uys in principle, but said Western humour or satire was viewed completely differently in the African context.

“As modern as we are and we go and eat sushi and what not, this is still Africa. Black people will always interpret something like that in a different way,” Gola said. He said that South Africa’s turbulent history was still a bone of contention in the artistic realm and as such had to be treated with kid gloves.

“You will always have artistic licence to push boundaries, but always be aware of the space you operate in. In as much as an Israeli person does not want to be criticised by a German person, elderly black people are not comfortable being criticised by white people,” Gola said.

Cultural differences have also been drawn into question because Zuma’s practice of polygamy and siring of children out of wedlock cannot be used as points of criticism, according to some commentators.

“In Zulu culture you respect adults,” said Professor Nhlanhla Mathonsi, head of the school of Zulu Studies at the University of KwaZulu-Natal. “It is not earned – it is predetermined.

“I am not sure of any culture that condones people saying whatever they feel to other people, but most certainly, when a person is old you offer them respect and it is up to them to reciprocate that respect, regardless of their position,” Mathonsi added.
As such, questions are being asked about Murray’s intention when he created The Spear and whether he truly meant to create art or simply stir controversy.

“If you want a response then you must be prepared to take responsibility for that response,” freelance strategist and writer Sarah Britten said. “One must question if Murray wondered what the impact would be beyond the walls of the gallery. Whereas the intellectual audience that frequents places such as the Goodman Gallery would have got the message, the wider South African audience most certainly would not have.”

However, Britten said that in as much as Murray’s art work was controversial, it was being used as a diversion.

“Everyone concentrates on the penis instead of the real issues at hand. In the same way as the whole Helen Zille refugee remark on Twitter muddied the waters, the controversy around the spear does so too,” Britten said.

Uys echoed Britten’s sentiment and said Zuma’s apparent humiliation, as caused by his own actions, had led him to employ the scapegoat of racism.

“Freedom of expression is sacred to our democracy and, as a citizen of our democracy, President Zuma has the right to demand an apology, but does he have to militarise an entire political party along racial lines?”