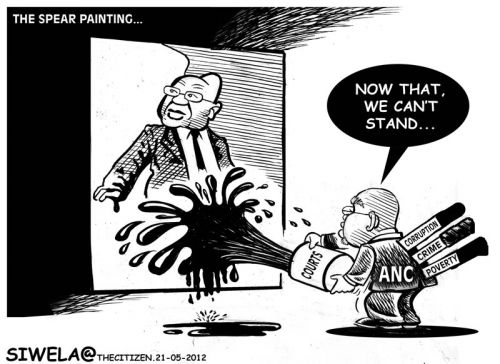 The Naked Truth About Art in South Africa

South African satirical artist Brett Murray’s “The Spear” shows president Jacob Zuma in a Leninesque pose, a revolutionary with his chest puffed out — and his genitals exposed.

The 70-year-old Zuma’s party, the African National Congress, has ruled South Africa since Nelson Mandela led it to power in the country’s first nonracial elections in 1994, ending the racial segregation period known as apartheid.

If the painting was meant to skewer the president, the tip pierced its target, and when it went up at Johannesburg’s prestigious Goodman Gallery a few weeks ago it made the beloved country cry.

Zuma himself howled that he was “offended and violated.” The ANC organized protests, ramped up its ongoing campaign to intimidate domestic media, and petitioned the country’s Supreme Court to order the work taken down, arguing that Murray’s proverbial blow below the belt violated Zuma’s constitutionally protected right to dignity and amounted to racist hate speech.

After a judge balked at the race argument, the ANC advocate broke down sobbing before the bench – and the ANC took it to the streets, organizing “the mother of all marches” on the gallery. Two Zuma supporters defaced the work in two separate attacks.

Other Zuma supporters went so far as to suggest Murray deserved treatment like Salman Rushdie, the British author whose novel, “The Satanic Verses,” provoked Iran’s Ayatollah Khomeini to issue a fatwa commanding Muslims to kill him. In a similar vein, officials of one of the country’s largest churches suggested Murray should be stoned to death.

Murray announced that he hadn’t intended “to harm the dignity of any person.”

A candid critic over many years, his other work in the show included “Hail to the Thief,” with the ANC logo overlaid with “For Sale” and “Sold” signs.

After intense pressure, “The Spear,” already destroyed anyway, was removed in what the ANC characterized as a “deal” with the gallery. (On May 30, the ANC withdrew a lawsuit it had filed against the gallery and a newspaper that had published the image on its web site.)

What the painting mostly revealed, though, are divides along the color lines of the so-called Rainbow Nation’s almost two decades since apartheid ended.

While there were blacks who defended the painting, including former ANC Youth League president and current thorn-in-the-ANC-side, Julius Malema, and whites who attacked it (including one of the vandals), there was a clear trend among black and white radio callers and letter writers.

Black South Africans were especially enraged that the attack on the president was so, well, naked, and the outcry provoked trepidation among whites who saw yet another ANC attempt, following introduction of media-stifling legislation, to control speech.

Zuma, a former Communist Party member who became president in 2009 after upending Mandela’s handpicked successor, Thabo Mbeki, has had a storied career, to go with a large family. He has 22 children by six wives and other women. In 2005, he was acquitted of a rape charge that involved sex with a babysitter who was a friend’s daughter. When it came out in court that he hadn’t worn a condom, he declared that he hadn’t feared getting AIDS because he’d had a post-coital shower.

Zuma’s complaints included that “The Spear” made him look like a womanizer and a philanderer.

But Zuma’s personal life is old news and it was far from the only reason blacks were offended. On one level, they saw “The Spear” as an insult to an elder and an authority figure, and an attack on their culture, which is more accepting of polygamy, by an artist from a white community with a grim history of disrespectful behavior.

The topic of art and race in South Africa has other dimensions. Whites have been the patrons, blacks subjects. In the homes of whites, it’s common to see portraits of blacks and genre scenes of black life that few whites ever experience directly. And yet, perhaps more strangely, it’s rare to see portrayals of white faces or white life at all in whites’ homes. Instead, there are still lifes, animals, architecture and landscapes – in short, the things whites, about 10 percent of the population, tend to own.

If art is an expression of the soul, what does it say when whites decorate their homes with work that excludes themselves? Or what does it say merely about the idea of belonging, or the ownership of place beyond the titles and deeds to actual property – which whites still disproportionately control almost a generation since apartheid collapsed?

In the current controversy, many whites were considerably less exercised than blacks about Murray’s painting. As one powerful art buyer told me, “Brett maybe went a little too far, but of course that’s his right.”

Moreover, the Spear Affair worried a lot of already-nervous whites who look to the northern border fearing the “Zimbabwe-ization” of South Africa.

“I have a sense of slightly sickening foreboding over The Spear mess,” Heidi Holland, author of Dinner with Mugabe, told me. “It’s a metaphor for our current political evolution, I think: angry, damaged, baffled.

“Our ‘democracy’,” she said, “exists on a very thin line. It’s a situation like this that we may see how quickly that line could be erased.”

Pallo Jordan, the ANC’s former arts and culture minister, once wrote that artists “have assisted us to detect fundamental weakness in even the greatest figures; they have helped us uncover the best-concealed flaws even in the most powerful.”

It was easy to embrace such an ideal when it saw works of art as weapons to help the ANC win power. Not so much, apparently, when the spear’s poisoned tip is pointing at them.

Meantime, the country’s most powerful figure has barely concealed his own flaws.

But Zuma also missed a superb opportunity to get his critics to zip it – and reassure legions of disillusioned compatriots. Instead of shedding crocodile tears about being mocked in the art, Zuma could have defended the higher principle of freedom, and in so doing demonstrated that he was a bigger man than that.