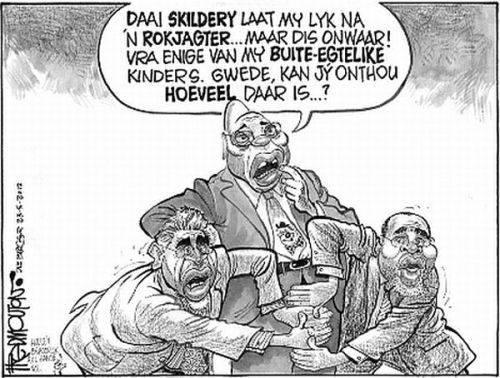 JOHANNESBURG - The City Press newspaper said on Thursday it would not remove a picture of President Jacob Zuma because to do so would be an act of censorship.

The portrait has caused quite a stir among members of the African National Congress (ANC).
The ANC demanded the paper remove the picture from its website and that the Goodman Gallery remove the portrait from display.

City Press Editor Ferial Hafferjee told Eyewitness News the paper will not back down.
“I am quite incredulous. This is a work of art hanging in a public gallery. We covered the story of the exhibition and almost five days later, the ANC has noticed it.”

The portrait, titled The Spear, has angered the ANC and the party has threatened to take the matter to court.

The ANC’s attorney Mpilo Kekane said they were still at an early stage in the process.
“We’ve sent a letter to them stating that we find they seem to be violating Mr Zuma’s dignity.”
The party added the right to freedom of expression should not outweigh the dignity of President Zuma.
The party hopes the courts will force Murray and the Goodman Gallery to remove the portrait from display, while also removing the art from any website.