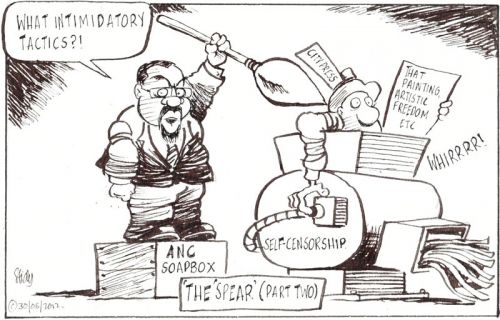 Mthembu denies any split in ANC over ‘Spear’

The ANC has claimed it is unanimous in its condemnation of ‘The Spear’, despite reports suggesting otherwise.

“For anyone to say the ANC is not united on this matter would be disingenuous anfurthermore be fudging the issues at hand,” said spokesperson Jackson Mthembu, told the Mail & Guardian during an interview at Luthuli House on Monday.

Mthembu was referring to a City Press report over the weekend, which claimed senior ANC members were not in agreement with the party’s action on the matter.

The paper also carried an opinion piece by expelled youth league president Julius Malema, which lambasted the ANC for “posing a threat to democracy”.

Mthembu said reports of divisions could have originated from unhappy ANC members who sought higher leadership positions within the party. “You will obviously have people who are disgruntled with the party, who might take a different line but that doesn’t mean we are not united on this issue,” Mthembu said.

The battle over the controversial artwork is currently being fought on the streets and in court after first coming to light mere weeks ago.

The ANC is seeking an urgent court interdict against the gallery and the newspaper, demanding the image to be removed from the exhibition and taken off the newspaper’s website, arguing that it violates President Jacob Zuma’s right to privacy and dignity.
The painting depicts Zuma with his genitals exposed, and forms part of artist Brett Murray’s Hail to the Thief II exhibition.

After the interdict hearing was postponed last week, the ANC called for a boycott of the City Press and called on all its members to march on the Goodman Gallery on Tuesday.

The ANC could not confirm how many of its members would be attending the march only to say final numbers could be “in the tens of thousands”.

The City Press has since withdrawn the picture from their website but Mthembu said the ANC still expects an apology from the paper. “If they manage to do this, it will say to us they realise the great pain the publication of this portrait has caused,” he said.

Mabokela claimed he did so to protect Zuma’s image, while la Grange said he defaced the painting to prevent a race war.

Mthembu also discounted reports suggesting Zuma was using the furore surrounding the painting as a rallying tool for support ahead of the ANC elective conference in Mangaung this December.

“Anybody saying this is Zuma playing victim, please god, give the ANC some credit. There is no one who would use such an image to play victim,” Mthembu said.

Mthembu claimed the president was unaware of the painting’s existence when the ANC decided to take action. “We did what we thought was right as the leadership of the ANC and we stick to our decision.