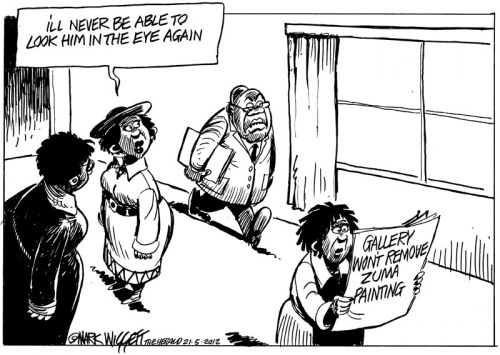 S.Africa’s ANC fumes over art ridiculing president
Published May 17, 2012
Associated Press
JOHANNESBURG – South Africa’s governing party said Thursday it will demand the removal of a painting from an exhibition by one of the nation’s best-known artists that ridicules the party and the president with graphic and provocative imagery.

Brett Murray’s sculptures and paintings, in an exhibition that opened at a major Johannesburg gallery last week titled “Hail to the Thief II,” are an “abuse of freedom of artistic expression,” ANC spokesman Jackson Mthembu said in a statement Thursday. He added ANC lawyers will go to court to force the Goodman Gallery to remove a painting of ANC leader President Jacob Zuma from the exhibition and from its website.
The gallery did not immediately respond to a call and an email requesting comment. Murray, known for provocative and political work, said through the gallery that he would have no comment.

The painting that most angered Mthembu is a black, red and yellow acrylic on canvas priced at 120,000 rand (about $15,000) called “The Spear.” In a style reminiscent of Andy Warhol’s brightly colored Marilyn Monroe portraits, it depicts Zuma in a suit and what could be a codpiece accentuating his genitals. Some observers say it depicts Zuma exposing his genitals.

Other work in the show recalls Soviet-era propaganda posters, and twists political slogans to acerbic effect. In an essay accompanying the exhibit, curators say the work forms “part of a vitriolic and succinct censure of bad governance and are (Murray’s) attempts to humorously expose the paucity of morals and greed within the ruling elite.”

A silkscreen in the show has the silhouette of a machine-gun toting guerrilla with Murray’s own version of the well-known last words of Solomon Mahlangu, an ANC militant who was hanged by the apartheid government in 1979:”Tell my people that I love them and that they must continue the struggle for Chivas Regal … and kick-backs.”

Visitors can take away posters with the ANC spear-and-shield logo and two phrases: “For sale” and “Sold.”
Murray’s criticism of the ANC echoes commentary that has appeared in newspaper articles and editorial cartoons and been debated on talk radio in South Africa.

In 2008, two years after Zuma was acquitted of rape charges, cartoonist Jonathan Shapiro depicted Zuma with his pants down, preparing to rape a blindfolded, female figure symbolizing justice. Shapiro, who signs his work Zapiro, was commenting at the time on allegations Zuma was trying to intimidate legal authorities.