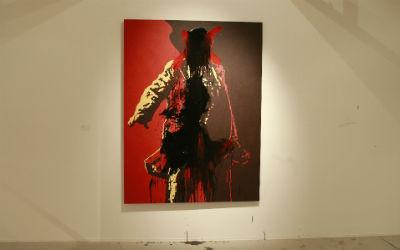 
We must be free to mock Jacob Zuma

Sharmini Brookes reports from South Africa on the storm caused by a painting of the president’s penis.

Murray’s portrait showed Zuma in an iconographic Lenin-style pose, fully clothed apart from his penis, which is protruding from his zipper. The painting is called ‘The Spear of the Nation’. It is a stylised cartoon in red and black and is meant to satirise political power. Murray says he wanted to make a point about how the leadership of the African National Congress, of which Zuma is president, had betrayed its Communist ideology.

The Goodman Gallery in Johannesburg, which curated the Brett Murray exhibition and Zuma portrait, normally finds it hard to persuade the South African public to enter its portals. Indeed, the painting had been hanging in Goodman for four days with few visitors and barely a murmur about its content. But then, Murray gave an interview to a journalist at the City Press newspaper, which also published the portrait in its pages, and there followed an outcry from the ANC, which demanded that the painting be removed on the grounds that it was offensive to people of African descent. When the gallery refused, a court edict was issued, to try to force a removal.

This action led to the defacing of the painting by two protesters and a public protest outside the gallery, which was egged on by ANC spokespeople, notably Gwede Mantashe, ANC secretary general, who said the painting was rude, crude, disrespectful and racist. Mantashe said the battle lines had been drawn between those who supported freedom of expression without limits and those who supported racial dignity.

Barend La Grand, one of the (white) defacers of the painting, said that prior to the ANC statement and court action, he had had no problem with the painting. He liked Murray’s work and had admired the portrait. What led him to deface the painting was his fear of black reprisals against South Africa’s minority white community, given that the painting was painted by a white artist and was being exhibited in a white-owned gallery. He wanted blacks to know that some white people are sensitive to the feelings of the black community and do not want to cause them offence.

The highly racialised debate in South Africa means the painting has not been judged on its aesthetic value. Those few who have commented on the aesthetics, such as Mary Corigall of SA’s Sunday Independent, point out that it is not necessarily good art. Its political point is too obvious - too direct and vitriolic. The painting reminds me of Banksy’s street art – obviously designed to elicit a knowing sneer about those in authority.

Instead of a debate about the artistic value of Murray’s portrait, we have a discussion about whether it is offensive to black people and, if it is, should it have been painted and exhibited at all? Likening it to the Danish Muhammad cartoons incident, Pallo Jordan, a leading member of the ANC, said that although he supports freedom of expression as laid down in the SA constitution, and the idea that an artist has the right to paint whatever he wants, artists still need to consider the context in which they are working; they must take account of the climate and the sensitivities of various people when deciding what kind of works to produce.

Those Danish cartoonists should not have done what they did, he says, because there is apparently widespread ‘Islamophobia’ in Europe. Likewise, Murray should apparently have borne in mind that, ‘There is the right to freedom of expression and there is the right to dignity’, said Jordan. He compared it to the recent banning of the song ‘Shoot the Boer’, traditionally sung by the ANC’s Youth League, which would not have caused much outcry in the years of the struggle against Apartheid but which was now considered an affront to the minority white community.

The racialisation of this debate has led to much defensiveness among those who would normally oppose censorship. Mandy Rosseau, international editor of City Press, said the paper would think seriously about removing a photo of Murray’s portrait from its website – it has now done that, in the name of reducing tensions in SA. City Limits is now openly calling for dialogue with the ANC, to discuss where the boundaries should be drawn in relation to art and freedom of expression.

For me, it is even more important to defend artistic expression and free speech when they cause offence and make people feel uncomfortable. Artists must be free to express their creativity and to question the norms of society without having to feel emotionally sensitive to their environment or its inhabitants. There can be no limits to this process, no moral or legal pressure on artists to take into consideration how whites or blacks or anyone might feel about their work. Otherwise we will end up with a situation where South Africa’s old, tyrannical system of political censorship, most frequently used against the ANC and its supporters, will be rehabilitated in PC, ‘anti-racist’ terms, with the ostensible aim of ‘keeping the peace’ and ensuring that neither the minority nor majority community ever feels offended.

Of course, critics of Murray’s portrait have equal freedom to say what they want about the painting, to mock it or ridicule it or say it is rubbish. By trying to prevent the public from seeing the painting and deciding for themselves if it has any value, the ANC is treating us like children who need to be protected from unsavoury images. That is demeaning to everyone in South Africa.

Sharmini Brookes is a freelance writer currently based in Johannesburg.