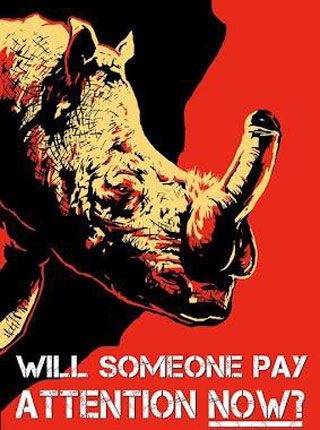 The ANC’s Loerie-winning integrated PR campaign
By: Sarah Britten
4 Jun 2012 13:093
Campaign: The Spear of the Nation

Art is not something that gets talked about in a country where people care far more about sport, politics, celebrities or the business of survival. So how do you make art matter? Faced with a challenging brief, ANC developed an integrated campaign for the Goodman Gallery that achieved an outstanding return on investment and demonstrated the power of a big idea.

In a cluttered communication context, art receives little coverage in comparison to sport, politics or entertainment. Achieving high awareness levels with communication around a subject often perceived as obscure and elitist would be a major challenge.

Research showed that everybody has a different idea about what “art” is - but few South Africans actually understand it. Saying that art matters would not achieve the cut through the team was looking for: it would have to be demonstrated in a way that was simple and easy to understand.

For this reason, the decision was made not to tackle art generically, but to focus on a single work which exemplified the power of art to make us feel and (in some cases) think.

The proposition needed to be simple enough to be memorable and compelling, but flexible enough to be tweaked for the needs of different target audiences. After exploring alternatives such as “art makes the world beautiful” and “art makes you think”, it was decided that a provocative approach would be most effective. In consultation with the client, the agency felt that “art is offensive” was best positioned to cut through the clutter.

Based on focus group findings, the team knew that for art to be made relevant to a broad cross-section of South Africans, messages relevant to their needs and aspirations would need to be deployed. Hot button issues guaranteed to provoke a public response were selected. For LSM 4-6, the message focused around racism and respect for African culture. For LSM 8-10, the key message was the link between art and freedom of speech and in turn with fears of the erosion of other freedoms.

The strategy was simple: create a highly political artwork guaranteed to offend most South Africans, draw attention to it, foment public outrage and maintain the hype.

The key visual needed to be simple and easy to understand while attracting as much attention as possible. Many South Africans may have missed the historical references in Brett Murray’s painting of Jacob Zuma as Lenin, but the addition of male genitalia made the offensiveness of the work obvious. Thus it required little in the way of interpretation, important in a conservative market with very low levels of art literacy.

The strong visual also provided a focal point for a campaign in which so many different elements were employed. When the campaign needed refreshing, the key visual was updated during an activation which in turn generated further conversation.

The team knew that traditional above-the-line advertising would be wallpaper. In order to ensure talkability, extensive use was made of events, flash mobs, activations and word of mouth to drive conversation. All relevant touchpoints were used, with television and radio debate, extensive coverage in print and online and discussion on social media. Events and announcements were carefully timed to ensure maximum media coverage and prevent wearout.

Every event was designed and timed to trigger further discussion, resulting in a highly efficient campaign requiring no ATL spend.
• Phase 1: build up??Initially, awareness of the work built up gradually. “The Spear of the Nation” would have remained known only to South Africans already interested in art, were it not for the fact that it was published in the City Press newspaper. ANC drew public attention to it by denouncing the painting itself, the artist and the Goodman Gallery, as well as the newspaper. ?
• Phase 2: rollout??The campaign moved up another gear as the full messaging strategy was rolled out. Marches, flash mobs, activations and calls for “The Spear” to be destroyed focused on the culture and respect message, while online the focus was around threats to freedom of expression. Parodies of the offending painting began to appear and #TheSpear dominated Twitter.??To ensure that high levels of interest were maintained, the creative was refreshed with an activation involving two men who defaced the painting in front of a camera crew. To continue to hold the interest of a public distracted by many other messages, calls were then made to boycott City Press, which then became a symbol of media freedom and drove additional conversation. ?
• Phase 3: resolution??After initial resistance, City Press editor Ferial Haffajee (@ferialhaffajee agreed to demands to take the image off the newspaper’s website, revealing her reasons in a dramatic letter. The Goodman Gallery and ANC reached agreement and the case was withdrawn.??Just as interest began to subside, a final element was introduced, as the Film and Publications Board ruled on the image, declaring it unfit to be viewed by children under the age of 16. “The Spear” continued to be a major subject of discussion at cocktail parties and is likely to stand out as one of the major news events of the year.
Results

“The Spear of the Nation” achieved awareness levels unprecedented in South Africa, as well as globally.

As of 31 May, “The Spear” received over R48 million in equivalent advertising value, an impressive achievement in such a short space of time. The Goodman Gallery is now world-famous, Haffajee has entrenched her status as our first celebrity editor, and the City Press enjoyed good sales while underlining its credibility as a bulwark of media freedom.

Importantly, art and questions around its role in society dominated news coverage and public discussion for more than two weeks.