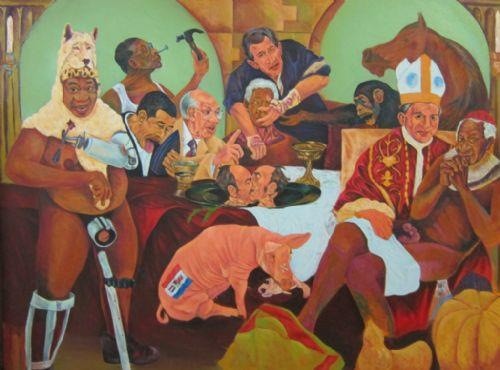 A painting by Ayanda Mabulu ­titled ­Ngcono ­ihlwempu kunesibhanxa ­sesityebi (Better poor than a rich ­puppet). In this work, Jacob Zuma is depicted with his exposed penis supported by a crutch.

The great Spear debate: The art of criticism seems to be emotionally selective

As the nation’s blood boiled over Brett Murray’s painting in which President Jacob Zuma’s “genitals” were exposed, similarly shocking work by another artist has been ignored.

One of his paintings that caught the public eye last week is titled Ngcono ihlwempu kunesibhanxa sesityebi (Better poor than a rich puppet).

In this work, Jacob Zuma is depicted with his exposed penis supported by a crutch, apparently to symbolise the frequency of Zuma’s sexual behaviour.

Other nude figures include a reclining Archbishop Emeritus Desmond Tutu, whose genitals are also exposed.

Zimbabwean President Robert Mugabe and a chimpanzee are also included in the composition.

Another of his paintings includes political figures represented in a surrealist style to drive home his vision of post-apartheid South Africa.

Explaining his work, Mabulu says: “I grew up during the tail end of apartheid, so I saw uncles who were wounded by it. That means I was also affected by it.”

He adds: “As an artist, when you see the government that is supposed to be running a democratic system of freedom using the techniques of apartheid, you must say something.”

Asked for his thoughts on the debate surrounding Brett Murray’s The Spear, he says: “I made my painting in 2010. This shows you how we are ignored as black artists in South Africa.”

The 31-year-old painter says he doesn’t feel threatened or feel the need to self-censor as a result of the outcry surrounding the controversial portrait.

His painting, which depicts a pig urinating on the corpse of resistance icon Steve Biko, proves his point.

With regard to his vision of South Africa, Mabulu says: “I’m talking about the reconciliation settlement and how as black people we were fd in the process.