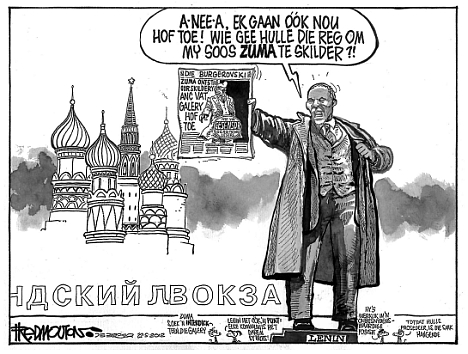 Critics say an artist disrespected Zuma’s presidency. But doesn’t he do the same with his behavior?

(The Root) - President Jacob Zuma of South Africa is again in the news for reasons that have to do with his marital history and sexual conduct. But this time the issue is with artist Brett Murray’s depiction of Zuma in a satirical portrayal that has him assuming a pose associated with Lenin - with a notable twist. In the painting, Zuma, who turned 70 in April, is depicted looking away in the distance, fully clothed in overcoat, trousers, jacket and tie, but his genitals are fully visible from his open fly. There is something completely at ease about the pose and the figure’s unzipped state.

The outcry from the two sides of the controversial portrait issue has been predictable. On one side are those who uphold freedom of expression as enshrined in the country’s constitution and support the artist’s right to say his mind. These voices say it is about time the South African president’s womanizing ways were put in context.

Raging against this view are those who condemn this infringement on Zuma’s dignity and assault on his right to privacy. For the most part, people with this viewpoint come from Zuma’s political party, the African National Congress, or ANC, its officials in government and a section of the clergy who paint Murray, a white South African, as a racist.

The arguments on this side are to be expected: African customs and culture are habitually being condemned by those who think theirs are superior, and once again, this view goes, the old prejudices about depraved African sexual mores are being rehashed by whites who are blinkered by their racism. Polygamy is a revered African tradition. Whites just don’t get it. Zuma is simply being true to his culture.

In sharp contrast to his predecessor Thabo Mbeki, Zuma is proudly populist, and very happily traditional in his choice of polygamy as a way of life, and in his political oratory and style. Recently, though, Zuma’s political career has been dogged by scandal, including a rape charge of which he was acquitted in 2007, as well as charges of bribery and corruption, from which he narrowly escaped trial because of procedural errors just before he was sworn in as president in 2009. It is easy to see why Zuma’s sexually profligate behavior, as some see it, would provoke controversy in a multicultural and racially mixed South Africa.