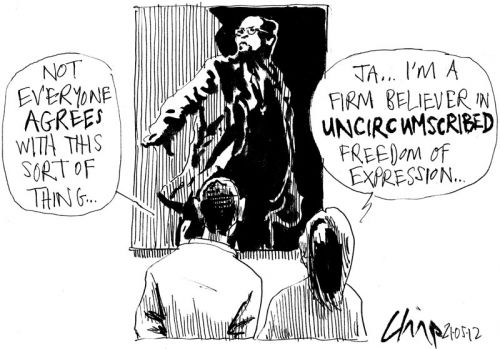 The African National Congress wants the Goodman Gallery to remove a painting of Mr Zuma called The Spear, which depicts the president with his genitals exposed, and another work that has a for-sale sign superimposed over the party logo.

The picture of Mr Zuma is a facsimile of a famous poster of communist revolutionary Vladimir Lenin. In the red, black and yellow drawing, the president is depicted as striking Lenin’s heroic stance, except his genitals hang outside of his trousers.

The works are part of a collection called Hail to the Thief and are meant to question whether the century-old African National Congress has lost its moral compass.
“It’s making a mockery of the highest office,” ANC spokesman Jackson Mthembu said.
Mr Mthembu said the artist was within his rights to express himself but said The Spear was “vulgar” and ridiculed Mr Zuma’s stature.

The collection takes a provocative look at ANC heroes and highlights public perception that there is growing corruption in government, with officials abusing positions to amass wealth.
Other works include a Soviet-style poster reading: “The Kleptocrats” and “We demand Chivas, BMW’s and Bribes”.

The images play to concerns raised by international investors and the ANC’s governing partner, labour federation COSATU, which has said South Africa is becoming a “predator state” for sale to the highest bidder.

“We are not going to remove the images for the sake of defending the artist’s right to freedom of expression and for the sake of upholding the gallery’s reputation,” said the gallery’s Lara Koseff.
Since coming into office in 2009, Mr Zuma has been widely regarded as unimpressive on the policy front, while making headlines with his colourful personal life.

The president has been married six times and fathered 21 children. He faces a race for re-election as the party leader at the end of this year.

The Spear, by well-known anti-apartheid artist Brett Murray, has already been sold for R136,000 ($16,548) to a German citizen.Anton Harber, chairman of the Freedom of Expression Institute called the ANC’s demands “silly”.”I can see that some of the images may make people feel uncomfortable but art is not there to make people feel comfortable,” Mr Harber said.”It is meant to get us thinking and talking about pertinent issues of corruption, nepotism … these are serious things.”
AFP