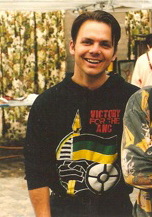 “At the outset, I would like to say that I am a proud South African and a former supporter of the ANC. I am not a racist. I do not produce art with an intention to hurt, humiliate or insult, and that includes the painting that has caused this controversy.

I emphatically deny that any such intention motivated the painting or exhibiting of The Spear. This will be borne out by my explanation as to the background and context of my work. The Spear has a dual purpose: it is a work of protest or resistance art, and it is a satirical piece.

I would like to explain my history to give a context to my work.

I was born in South Africa and raised, in the 1970s and 1980s, in a society that was perverted, controlled by corrupt, morally bereft politicians who treated South Africa - my country - as a personal fiefdom of their racist elite. To preserve their position of illegitimate power, tactics of intimidation, coercion, violence, manipulation, and misuse of intelligence and police forces, were the norm.

Censorship prevailed and freedom of expression was severely curtailed. White men, such as me, were conscripted into the army to take up arms against fellow South Africans, to fight a war we did not believe in against enemies that we considered to be friends.

I [therefore], in order to avoid conscription, studied for 10 years, and thereafter went into self-imposed exile in London until the ANC was unbanned and I returned to South Africa.

While I was studying, I was involved in anti-apartheid activities in the trade union movement, church groups, youth groups, and the End Conscription Campaign. As an artist, I produced and designed banners, posters, stickers, protest worker diaries and the like in support of the struggle.

It was growing up in this apartheid society that caused me, from an early age, to think about issues of power, race, politics, patriarchy, oppression and the manipulation of the media.

Indeed, these themes have by and large prevailed through my work as an artist over many years.

When I studied for my master’s in fine arts, I reflected satirically on the apartheid regime. The works consisted of satirical figures describing policemen with dynamite in their ears, pigs as soldiers.
Like many other South Africans, I embraced the dawn of a new South Africa. I was teaching art at
Stellenbosch University in 1994 when South Africa’s first democratic election was held and, as a supporter of the ANC, I proudly cast my ballot on April 27 1994.

That day signified hope, freedom, an end to tyranny and the dawn of a new era for me, my countrymen and the whole world. South Africa moved from being a pariah state to being the proudest nation in the world.
As our democracy developed, cracks began to show in the way that the ruling elite was implementing the ideals of the Freedom Charter and our constitution.

From my perspective as an artist I felt a sense of betrayal, where heroes of the struggle now appeared to be corrupt, power-hungry and greedy, or where ideals that many had died or made sacrifices for were abandoned on the altar of expedience.

Another controversial feature of the first applicant’s public life was the failure by the prosecuting authorities to proceed with corruption charges against him, notwithstanding the apparent existence of evidence to sustain such charges.

Details of the first applicant’s sex life have been well documented in the public domain. Notwithstanding the fact that he has four wives, he has engaged in extra-marital sex on at least two occasions.

For me, satire is critical entertainment. While I might be attacking and ridiculing specific targets, what I am actually doing is articulating my vision of an ideal world in which I want to live . In this instance, that preferred ideal in the South African context is the Freedom Charter.

The resulting debate that has surrounded this work is in itself evidence that this does happen and that artwork can provoke these debates, however unsettling they might be.

There is therefore no reason for artists to be censored, however uncomfortable this might be for individuals and for society at large.

For me, The Spear has a far broader meaning than some of the public discourse on its meaning, including the first applicant’s interpretation. It is a metaphor for power, greed and patriarchy.”