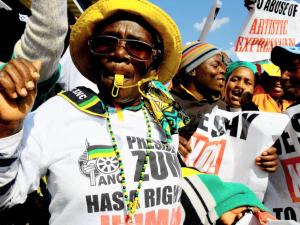 Cope leader Mosiuoa Lekota has accused the ANC of opening the door to dictatorship by using “fascist tactics” in its response to the controversial painting, The Spear, by Brett Murray.

By calling on City Press and the Goodman Gallery to remove images of the painting from their website and exhibition, the ruling party had expunged section 16 (1) and (2) from the constitution, he said.

“Specifically the ‘freedom of the press and other media’ provided for in 16(1)(a) and ‘freedom of artistic creativity’ articulated in 16(1)(c) became casualties.”

“Now the editor of the City Press, anxious about her personal safety and that of her journalists, apologised for exercising her constitutionally enshrined right and removed the artistic work from the website of the newspaper.”

Lekota said the owner of the Goodman Gallery had “been dragged before TV to issue an apology under military-like supervision”.

“When the ruling party, that is, the government, frog-marches a citizen in this way, as (Arts and Culture Minister Paul) Mashatile did, and threatens to unleash mass force on society, the constitution is thrown out of the window, Lekota said.

Meanwhile, despite all its demands being met on the painting, the ANC was still not happy. An olive branch from City Press. A written apology from the Goodman Gallery. And a public explanation from artist Murray.

Even with those three victories for the ANC, the anti-Spear march on Tuesday ended in an ultimatum: remove the painting depicting President Jacob Zuma’s genitals from the Goodman Gallery website, or the gallery itself will be shut down.

At 2pm, ANC secretary-general Gwede Mantashe emerged smiling from the building on Jan Smuts Avenue and announced the gallery would remove the image from its website. “Mission accomplished comrades,” shouted Mantashe.

Mantashe added: “We can now read the City Press, but don’t buy last week’s copy… You have achieved your mission.”

Almost immediately afterwards, the Goodman Gallery released a statement saying it had been in consultation with the ANC, but no such decision had been made. This was not the only disputed issue.

Mantashe and Higher Education Minister Blade Nzimande could not agree on the fate of the painting.

Nzimande said it should not go to its German buyer, but be destroyed. However, Mantashe declared that its removal from the gallery and the two major websites on which it featured was enough.

“Freedom of expression will be defended… but it is not a licence to insult or trample on dignity,” said Mantashe.

Despite the ANC applying to the police for a march by 50 000 people, no more than 5 000 arrived in hired buses on Tuesday.

But police took no chances, deploying a huge contingent of riot police, some on horseback, and frequent helicopter flyovers overhead.

Two women, standing with notebooks on the fringes of the protest, quietly sketched protesters, while demonstrators held up placards that read: “Draw your white father naked, not our president”, “We say NO to abuse of artistic expression”, and “Less skin, we win”.

Last week, Cosatu, the National Union of Mineworkers and the SACP called on their members to storm the Goodman Gallery where the painting was then on display.

Louis Mabokela, one of the men accused of defacing the painting, was among the protesters on Tuesday. “The insult needed to be covered, so I did it,” he said.

His uncle, Stephen Sefofa, who paid Mabokela’s bail after his arrest last week, said: “An insult is an insult… We have to march.”

The pair were happy to hear of City Press editor Ferial Haffajee’s apology and removal of the image from the paper’s website, but said they were awaiting apologies from the other parties involved.

Mabokela was filmed being head-butted by a Goodman Gallery security guard after smearing black paint on the painting last week. He is to appear again in the Hillbrow Magistrate’s Court.

“Today’s march is not only about Zuma, (but) all South Africans,” ANC secretary for Mpumalanga, Thokozani Ntuli, said. “We would also defend your dignity if you were embarrassed like this. (Zuma is) president but also a human being. He deserves to be respected… like everyone else, black or white.”