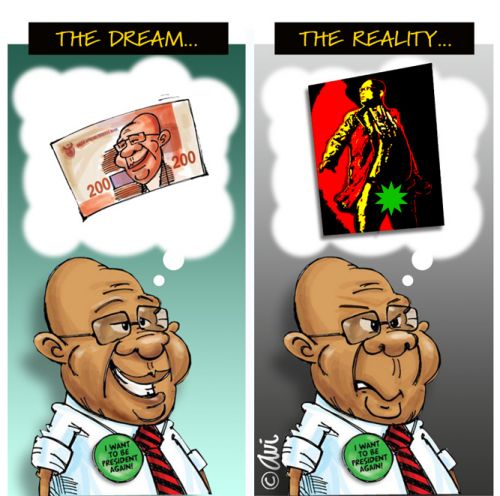 Our news team’s cameras were rolling as two men, one of them believed to be a university professor, defaced the controversial painting of President … ( Resource: Two Men Caught Defacing Controversial Zuma Painting
During the apartheid era, Michaelangelo’s Statue of David caused a controversy when displayed in a shop window and there were calls for David’s nakedness to be covered by a figleaf.

It is worth remembering this when considering the excited response by South Africans this week to the explicit painting of President Jacob Zuma by artist Brett Murray. We do not want to go back to a situation where art is censored because it offends the ruling party, or some take it upon themselves to dictate to others what is tasteful and acceptable. We want to celebrate our artists, and not denigrate and control them in the way of apartheid, though they may provoke, push the boundaries and even cause offence.

The Freedom of Expression Institute has been encouraged and disappointed by the excited response by South Africans to Murray’s work. Encouragement stems from the numbers who have derived a message from the painting, some of them not very meaningful but some extremely pointed and focussing on the message they have read into a piece that is part of a larger exhibition about issues of governance and corruption.

Disappointed because so many, especially among the leadership of the African National Congress and its alliance partners, have forgotten all those fine principles relating to freedom of expression and an open society for which so many fought. They misguidedly called for the picture’s removal and even destruction.

The FXI supports the Goodman Gallery in refusing to remove the picture and indeed going further by putting up a vigorous defence against an attempt by Zuma and the ANC to enlist the aid of a court to have the picture removed. The fact that the painting annoys or offends some people is no reason to seek to remove it.

The test of a country’s integrity and genuineness in supporting the principles of freedom of expression is its tolerance of expression which causes offence and anger and its insistence on ensuring that no harm comes to such work. We are horrified by the possibility that artwork might not be displayed in a gallery because it causes discomfit in the ruling party.

While we believe it to be healthy that the artwork has opened up important debate about tolerance, culture, race and representation, we are concerned that this debate has sometimes taken on a racial tinge. We need to confront and deal with this, but not through a return to censorship or the criminalisation of creative work.

We hope the courts will defend the artists’ right to free expression, as enshrined in the constitution, and the creative worker’s right to provoke debates and discussions of this sort. We urge the ANC to criticise, even to condemn the work if they wish, to engage in the issues it raises, but not pursue charges or court action which will amount to a bid to censor.

As for the treatment by the print and other media of Murray’s painting, somewhat different standards apply because of the sensitivity of certain audiences that are are likely to be exposed to such publications. A full depiction of the painting in an adult publication would hardly cause a ripple but more care has to be exercised where a publication is a newspaper entering homes where young children are present. That does not mean editors should ban such pictures but skillful treatment of the photograph is called for.

In addition, we must speak out strongly against the Shembe church leader who has called for the artist to be banned and stoned. The intolerance of such a statement is reminiscent of the worst of apartheid, and the threat of violence totally inappropriate in a constitutional democracy. We hope the ANC and the legal authorities will respond to this dangerous threat as swiftly and strongly as they have responded to a work of art.